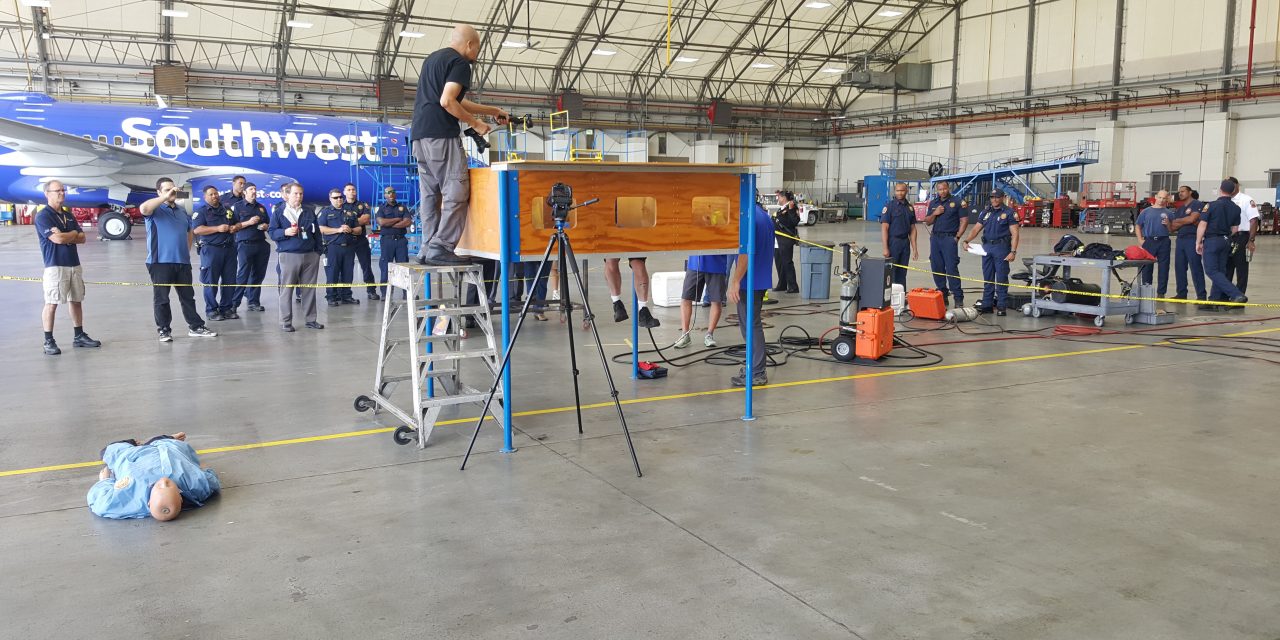 Editorial note: The ARFF Working Group acknowledges that local protocols and emergency plans may differ. All fire departments are encouraged to regular conduct ongoing hazard analysis of the risks affecting their airports, and to plan accordingly. The AHJ should provide guidance about who is in command of what type of incident and outline expected supporting roles.

Working within an aircraft confined space is an inherently dangerous operation and while there are rules and regulations in place to govern confined space operations, engulfment and entrapment emergencies are a real potential and can occur during maintenance activities.  Although infrequent, ARFF members may be called upon to rescue aircraft maintainers or other personnel that become incapacitated during confined space operations within aircraft confined spaces.  Rescuing or recovering a trapped aircraft mechanic requires the orchestrated, well-coordinated efforts of multiple agencies and personnel who are trained not just in traditional confined space rescue, but also in technical specialties involving aircraft hazards, design, and limitations.  To highlight an operational gap while also seeking to justify the enhancement of a special operations training program, the Atlanta Fire Rescue Department’s (AFRD) Aviation Fire Division identified the critical need to facilitate a full-scale exercise (FSE) involving Southwest Airlines and Delta Air Lines.  Also, the Aviation Division’s Training Section partnered with Embry Riddle Aeronautical University (ERAU) to assist with research development and the two competing airlines to have a one-day event consisting of multiple full-scale exercises (FSE) at each of the airlines’ hangars.  To involve all three operational shifts, three familiarizations were held prior to the FSE involving ARFF, airport structural units, AFRD special operations teams, Department of Aviation (DOA) staff, airline mechanics and administrative staff, and ERAU personnel. Reviewed in these sessions were aircraft familiarization, equipment compatibility, and procedural collaboration.

The overarching objective and rationale for the FSE was to create a better understanding of aircraft confined spaces and the human factors challenges associated with confined space rescue that exists in the aviation industry.  In most circumstances, the addition of knowledge in these areas can lead to an increase in operational effectiveness and safety while also reducing preventable injuries to maintenance personnel and costly damage to aircraft and property.  The Occupational Safety and Health Administration (OSHA) defines a confined space as an area with a limited opening that is large enough for personnel entry and exit, but is not designed for continuous occupation.  Under that broad definition, OSHA further classifies confined spaces as either permit or non-permit required (McEwan, 2007).   Permit required confined spaces contain hazards such as a flammable atmosphere (greater than 10% lower flammable limit), an oxygen deficient atmosphere (less than 19.5% or greater than 23.5%), and the potential for engulfment.  It is important to note, that a confined space can become an immediately dangerous to life or health (IDLH) environment when there is an urgent or delayed threat to life, when an event interferes with the ability to escape, or when entry would cause irreversible adverse health results.  Ultimately, OSHA strictly prohibits entry into such an area that has been deemed IDLH and requires that these environmental hazards be eliminated prior to entry.  While both permit and non-permit required confined spaces are found on an aircraft, the potential for workers who may require rescue is greatest in a permit required confined space, most notably an aircraft fuel tank.

There are guidelines that must be followed to enter a permit required confined space that is located within the confines of an aircraft.  These guidelines have been established to protect the worker as well as responders who would be involved in effecting a rescue or recovery.  Entry into a permit required confined space requires the completion of a confined space entry permit that details the entry supervisor, the entrant, the attendee, the equipment monitor, and identifies the rescue plan to be followed in the event of an emergency.  Additionally, personnel protective equipment (PPE), atmospheric monitoring equipment, and a communication plan are required for entry into the space.

On November 7, 2017, fifty-eight (58) attendees, thirty-two (32) of whom were responders, participated in the two-phase exercise.  The first phase was conducted in a Southwest hangar and consisted of three drills using a box-type simulator that replicated the wing section of a Boeing 737-700.  Drill One was a demonstration performed by Southwest aircraft maintenance personnel in which one victim, a mannequin, was used to replicate a downed mechanic being rescued by a partner. It should be noted that during this demonstration, no PPE was utilized throughout the duration of the drill. The next drill was orchestrated very similarly to the first; however, approved and normally worn PPE was used for realism. During the third drill, two real human victims were rescued from within the confines of the simulator.  The first victim was an airlines mechanic as was the second victim who was also the initial rescuer.  The culmination of this drill concluded with a collaborative rescue of both mechanics by the Atlanta Fire Rescue Department’s special operations personnel.

The second phase of these exercises was located at a nearby Delta hangar and involved a full-scale confined space rescue from the center fuel tank of an Airbus 330-300 series aircraft. Due to time constraints and fleet limitations, only one drill could be performed within the confines of the wide body aircraft in which live mechanics were utilized.  Similar to the finale at the Southwest hangar, this drill involved two mechanics being rescued by AFRD special operations teams.

The challenges encountered ranged from rescue personnel relying on traditional confined space ideologies and training which led to a belief all confined spaces are virtually the same; however, the aircraft presented distinct differences and revealed specific obstacles due to the significant differences presented between narrow and wide body aircraft.  During these drills there were some real challenges with communications and overall differentiation between traditional methodologies of confined space rescue versus that faced within the aviation industry.  Certainly, establishing and maintaining effective communications with mutual aid companies became very critical, as well as relationship building between all players and stakeholders.  Invariably there are times during such events that it is advantageous for the airlines to remain in command of the rescue and for the fire department to operate and maintain a supportive role.  We should not always assume command due to our lack of knowledge in a particular area or within a specific discipline.  There is a notification process for confined space entries and while the airline personnel often rescue their people before that notification is made, we should always maintain and exercise situational awareness throughout an incident.

In order to overcome the many challenges realized during these drills, continued cross-training, relationship building, and familiarizations should occur both internally and externally between the airlines and the fire department.  Above all, equipment should be tested for compatibility and policies, procedures, and best practices need to not only be defined, but also shared among all potential responders and stakeholders. This will foster continuity and expansion of the relationships while positively enhancing service delivery, providing a realization of response and access delays, and solidifying an overall beneficial outcome. Several factors (e.g. failed equipment, medical event, human error) can result in the need for a rescue and drive the need to conduct annual confined space rescue training and familiarizations.  Per OSHA requirements, the annual exercise plan is a useful tool to evaluate agency coordination, response times, hazard identification, and equipment proficiency.  The annual exercise also provides an opportunity to consider the human factor issues that may hinder an effective rescue.

Lessons learned during these full-scale exercises centered primarily upon engaging the responders with the most realistic scenarios within a live aircraft in order to yield the greatest knowledge and operational gains.   As a result, the utilization of an actual aircraft was far superior to the drills that were conducted in a mere simulator, and similarly, this concept was also realized when using humans, not mannequins, as victims/patients.  It was also very crucial that we practice like we play to achieve the highest levels of realism and urgency possible.  The use of PPE and atmospheric monitoring during all drills will also enhance the overall practicality and authenticity of the rescue. As to the administrative side of such a multi-player exercise, it was important that security clearances and access were established for mutual aid responders and observers in order to avoid violations and/or concerns.  To exercise real-world response times, realistic tests and evaluations were done concerning the escorting impact in order to ensure that the quickest access points were identified and communicated to incoming units.  Additionally, renting or purchasing an intrinsically safe camera in order to video the drills from within the fuel tank of the aircraft would also be advantageous to responders and observers positioned outside of the rescue.  Inherently, observers were limited to taking notes and recording information on paper based upon radio traffic and personnel movements rather than having the aid of a camera and viewing screen.  Though plenty of video and still pictures were captured on the exterior, interior documentation would have greatly assisted with visibility into the space and provided more realistic training materials for future use.

Eric Kave is a Section Chief with the Atlanta Fire Rescue Department in Atlanta, Georgia and leads the Airport Training Section at Hartsfield-Jackson Atlanta International Airport (ATL).  Chief Kave has thirty years of experience in the fire service, a bachelor’s degree in Emergency and Disaster Management and is currently working on an advanced degree in Management and Leadership.  His current research goals and aspirations encompass an extensive advancement and growth relative to contributions within the fire service, aircraft rescue & firefighting (ARFF), emergency management, and homeland security fields. 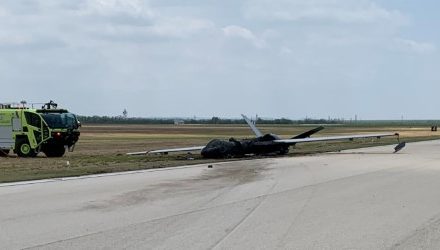 Alert III – 0 Souls on Board 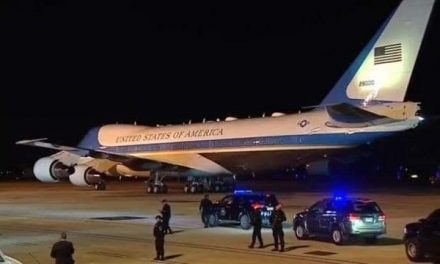 Planes That Transport the Most Important Leaders in the World