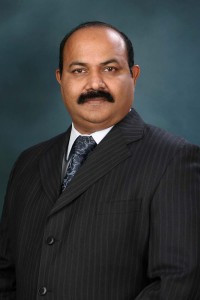 PS Ajith kumar has more than 35 years of experience in the field of aircraft rescue and firefighting. He started his career as  fire fighter  in 1976 with Indian Air Force , during  the 15 years period he has attained various training on aircraft rescue and fire fighting ,grew through ranks  and served most forward combat stations of  Indian Air Force. After voluntaty retirement from air force  he continued his career in the field of ARFF with civil aviation. He is a qualified FSM from IFTC, UK

In addition various ARFF training in India he had also under gone  Air Traffic Controllers training . He is  trained in Austria,Singapore and  ARFF commaders training at Switzerland. He was acitvely involved in building and commissioning of  New ARFF station at Cochin International Airport ,Kerala  , the first private airport in Inida and susequently for the Bangalore  green field airport in India . He is also speaker for the various international ARFF forums like IAFPA UK , AFJ ,Singapore Aviation Academy  and Indian Naval Academy etc .He is Co Chairman and editor for Indian-ARFF  forum IAFSSG, He is ARFF technical member in DGCA India . Currently he  is Deputy General Manager and Heads the Bangalore International Airport‘s ARFF department with Cat 10 level of protection.