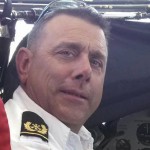 CHILDHOOD – I was born in Pueblo, Colorado where I lived until about the age of 3 when I moved to Southern California where I graduated high school from Polytechnic High School in Riverside, California.  I have 3 sisters and 2 brothers and all spread out through the country where one sister and brother live outside of Atlanta, Ga; one brother in Lancaster, Ca; one sister in Mesa, Az; and another just recently moved to Idaho.  My father is a retired Navy Reservist, and mother just recently retired from the State of Arizona.  Growing up, my father was my best friend meaning we did everything together such as camping, fishing, playing sports where he was my coach for several years in little league football and baseball…I still look up to him.  During high school you might say I was a rebel and would not listen to him, now I tell him “You were right Dad”.

MILITARY – In 1983, I joined the United States Air Force where I was supposed to be a Law Enforcement Specialist but was disqualified and was reassigned as a Fire Protection Specialist; nothing against my LEO friends but that was probably one of the best things that happened, those of you that served would know what I mean during a nice cold snowy night when you were tucked in your bed at the station while LE/SFS was counting rivets on aircraft.  I completed my training at Chanute AFB, I was assigned to Sembach Air Base in West Germany; a small base outside of Kaiserslautern and enjoyed every bit of that assignment.  My next assignment would take me to Randolph AFB in Texas where I would stay until I was honorably discharged in Oct 1992.  During my military tour I responded to a variety of military aircraft incidents, participated in advanced level trainings, made Senior Airman Below the Zone, and put on SSgt in 4 years.

CAREER & FAMILY – My civilian career started in April 1993 where I was hired by the Department of Defense for Bergstrom Air Reserve Station, now Austin-Bergstrom International Airport, where I was assigned as a crew chief or Lieutenant.  In December 1995, I was transferred to Kirtland AFB in Albuquerque, New Mexico where I climbed the ranks and is currently assigned as Asst. Fire Chief of Special Operations/Training.  Prior to my present position, I was assigned as a Battalion Chief and was directly responsible for 22 personnel; along with all of other associated duties for that position that include performing Asst. Chief Fire Chief duties.  In 1988 is when I met my wife Teri and on December 16, 1989 we were married.  Teri is currently in property management and runs a 180 unit apartment complex.  We have a son Drew that lives in San Diego and works in the advertisement business.  Teri is my rock, confident, partner, and best friend.  We also have two dogs that keep us busy.

LEADERSHIP – I was promoted into this position of Asst. Fire Chief of Special Operations/Training in August 2009.  Our department shares its runways with Albuquerque Sunport and handles all aircraft, structural, EMS, and special operations emergencies for the base; and all aircraft emergencies for the airport.  Some of my responsibilities include oversight of the training program, hazardous materials training for base responders, and special operations.  I am also involved with other activities, such as ARFF coordination with Albuquerque Sunport, and ARFF training between the Albuquerque fire department and Kirtland AFB fire department.  Providing aircraft live fire burns for some New Mexico fire departments.  Member with ARFF WG since 2001, during that time frame I coordinated a sectional training event, and assisted in coordinating the 2011 ARFF Chiefs and Leadership seminar.

I can keep going on and on but then I will not have anything to talk about when we meet.  Thank you for affording me the opportunity to be the Director of Section 5 and part of the ARFF WG team.  We still have a lot to do and look forward to making things happen for you and the group.  As an old fire chief use to say, “It’s high speed and low drag”.