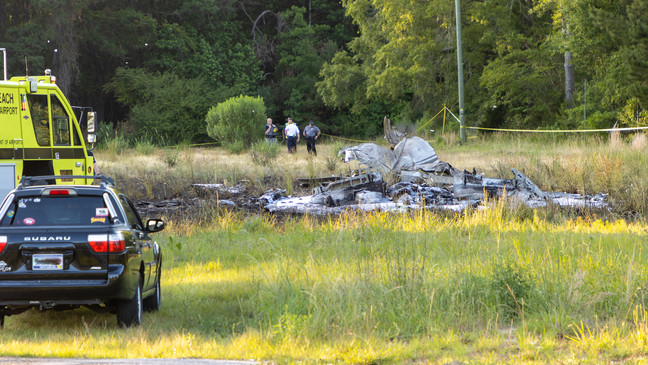 HORRY COUNTY, S.C. (WPDE) — One person is dead after a small plane crash in Horry County, according to Deputy Coroner Darris Fowler of Horry County.

Fowler has identified the victim has James Marklin Harper, 60, from North Myrtle Beach. Fowler says Harper died on scene from multiple injuries received in the crash.

Horry County Fire Rescue responded to the crash in the area of 3833 Socastee Boulevard Friday at 6:16 p.m.

A release from the Federal Aviation Administration (FAA) said a twin-engine Piper PA-31 crashed in a field about 2.5 miles north of Myrtle Beach International Airport (MYR) around 6:25 p.m.

The plane left from MYR for Grand Strand Airport, and the pilot was the only person on board, according to FAA.

The pilot was trying to return to MYR when the crash occurred, the FAA said.

The FAA will release the tail number of the aircraft after investigators verify it at the incident location.

The NTSB will be in charge of the investigation and will provide additional updates.

The FAA said that this information is preliminary and may change as a result of the investigation.

The National Transportation Safety Board said they are investigating the plane crash and an investigator is expected to arrive on the scene by Saturday.

ABC15 reporters on scene confirmed that Socastee Boulevard is back open for traffic. On scene, we heard from neighbors who attempted to help the pilot, but they say within minutes, the plane burst into flames.

“I mean it just engulfed into flames,” said Sarah Ortega who says if it wasn’t for some aware bystanders, they may have been hurt by the explosion.

“It shook the house that we were in and we walked out and saw the plane,” said Pat Bellamy who lives right next to the land where the plane went down. “It exploded and everything caught on fire, it was very scary.”

Many neighbors we spoke with were still shaken up by the incident. Some said they knew the moment it burst into flames that there was nothing they could do.

“That’s the hardest thing because you seen it happening and you knew once it hit they weren’t going to survive,” said Yana Mintz.

ABC15 crews are on scene working to find out more information.