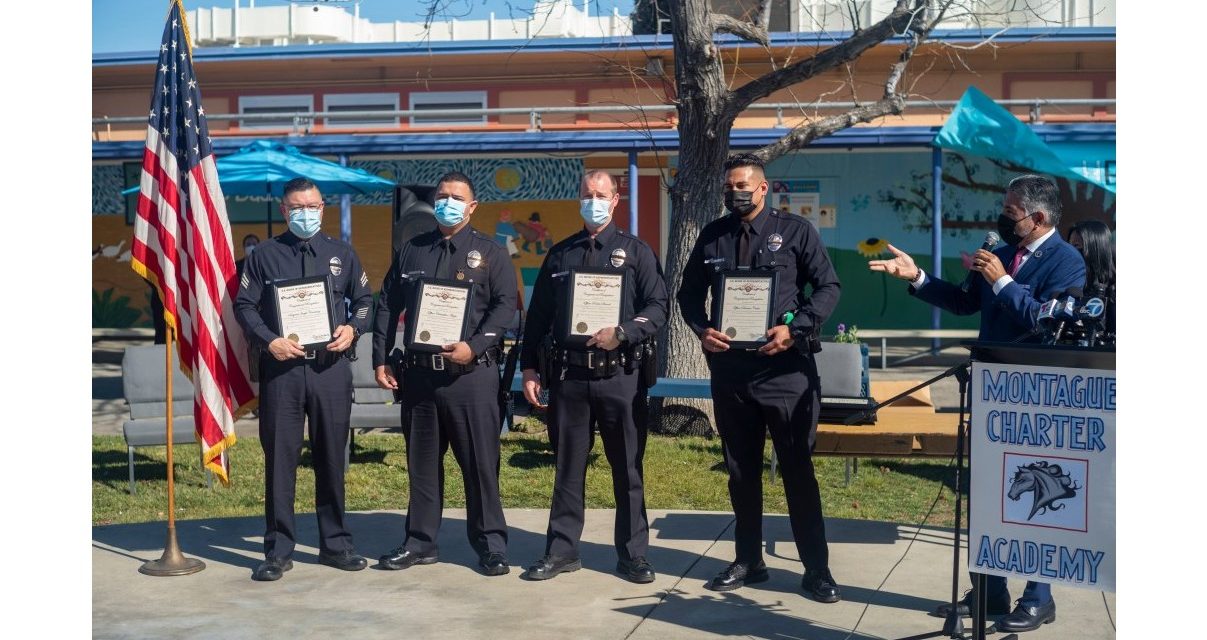 Los Angeles Police Department Sgt. Joseph Cavestany was in his police cruiser driving north on Osborne Street through Pacoima on Jan. 9 when he spotted something out of the ordinary: In front of him, about a mile away, a large white object was plunging out of the sky.

“It was big and white, about 50 feet off the ground,” he said Wednesday.

Whiteman Airport was not far away either. Figuring the object had to be a plane in distress, Cavestany watched as it dove down almost into his exact path, crashing near the intersection of Osborne and San Fernando Road. He booked it to the crash site.

Minutes later, Cavestany would watch as a trio of officers he was supervising dragged the injured pilot out of the destroyed airplane lying on railroad tracks. One of the officers’ body-worn cameras captured the moment, seconds later, when an oncoming train plowed through the plane, obliterating it.

“It was very surreal,” Cavestany said, of spotting the train and realizing it wasn’t going to stop. “I thought, ‘Man, is this really happening?’”

Cavestany and three others — officers Robert Sherock, Damien Castro and Christopher Aboyte — were honored for their quick actions in a ceremony Wednesday at Montague Charter Academy in Arleta, a few miles from the crash site.

Congressman Tony Cárdenas, who represents the northeast San Fernando Valley, presented the four with certificates acknowledging their dramatic rescue of the pilot.

“That man would probably be dead today,” Cárdenas said of the downed pilot. “But, thank God, he’s alive.”

Within hours of the crash, video of what happened was shared widely across the country, with many expressing shock at how close the train came to killing the pilot and possibly the officers trying to get him out.

Speaking to reporters at the scene that day, the train conductor said he received no warning of a plane on the tracks. Officials with Metrolink told the Southern California News Group they couldn’t confirm the conductor’s statements at the time of the crash. But a spokesman said trains can be stopped within five minutes of getting such warnings from dispatchers.

Such a warning may have come too late that day: Cavestany said around five minutes elapsed between the time he saw the plane crash and the train pass by. The first officer at the scene, he said he called dispatchers once he realized the plane was on the tracks.

Regardless, nearby residents for years have complained of safety concerns. Many want the airport closed for good.

The Board of Supervisors this week signaled it could do just that. The board voted to study what closing the airport would mean for the area.

Cavestany has patrolled the Pacoima area for more than two decades. In that time, he said he’s personally responded to at least five plane crashes around Whiteman.

Crashes often occur on nearby streets, he said, as pilots try to aim for the best and safest impromptu runway they can find.

The last crash, directly on to active train tracks, was obviously a first for the veteran officers who responded.

Cavestany said it took him about an hour to reckon with what he’d seen.

“Ok, that really just happened,” he said he thought to himself.