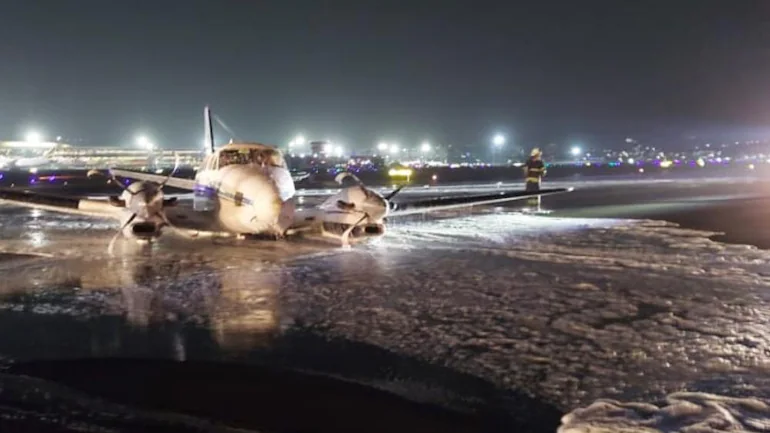 An air ambulance made an emergency landing at Mumbai airport on Thursday after one of its wheels separated during takeoff from Nagpur. The crew and patient escaped unharmed.

By Rahul Shrivastava and Sahil Joshi

A full state of emergency was declared at the Mumbai airport earlier on Thursday after an air ambulance suffered technical malfunction. The air ambulance, flying from Nagpur to Hyderabad, was diverted to Mumbai.

The C-90 VT-JIL aircraft operated by Jet Serve Aviation has successfully made an emergency landing at the Mumbai airport. The crew confirmed that the pilots attempted a ‘belly landing’ without using the landing gear.

Foam was put on the runway to safeguard against fire. The same can be seen in images of the emergency landing coming in from the Mumbai Airport.

There was one patient, two crew members, and a medical team comprising a doctor and a paramedic on-board the aircraft. All escaped unhurt.

The patient has been admitted to a hospital in Mumbai for the time being.

According to inputs, one wheel of the aircraft separated and fell away during takeoff from Nagpur airport.

In a statement on Thursday, the Mumbai International Airport said, “A full emergency was declared for a non-scheduled Beechcraft VT-JIL aircraft on route from Nagpur to Mumbai. The flight carrying 02 crew member, 01 patient, 01 relative and 01 doctor did a belly-landing at CSMIA at 21:09 hrs.”

“The airports emergency response team including the fire and rescue responders, follow-me vehicles, CISF, medical team amongst many others was activated instantly and on standby to provide immediate assistance to ensure the safe evacuation of the passengers. As a precautionary method, CSMIA also foamed RWY 27 in order to avoid the aircraft catching fire. All passengers were evacuated safely and flights operating in and out of CSMIA remain on schedule,” the statement went on to say.

On Thursday, a state-owned plane carrying Remdesivir injections crash landed in Madhya Pradesh’s Gwalior. The pilot, co-pilot and a government official were injured in the incident.

A similar incident came to light in Canada last year when the wheel of an Air Canada Express flight fell off from the aircraft during takeoff. The aircraft was asked to return to Montreal and managed to make an emergency landing.

One of the passengers had even shared a video of one of the side-wheels of the plane falling off during takeoff. Upon landing, the pilot was faced with the enormous task of balancing the aircraft with one wheel less.

In 2012, an Air India plane had to make an emergency landing after the aircraft lost one of the front wheels during takeoff from Silchar airport in Assam. The Guwahati-bound airplane was carrying 48 passengers and a crew of four at the time of the incident.

The pilots of the flight (ATR 9760), Urmila Yadav and Yashu had to keep circling the aircraft over the airport for more than two hours to burn off fuel while preparations were made to facilitate a safe emergency landing.

(With inputs from Vidya, Nagarjuna Dwarkanath and cameraperson Prashant Bhatt)