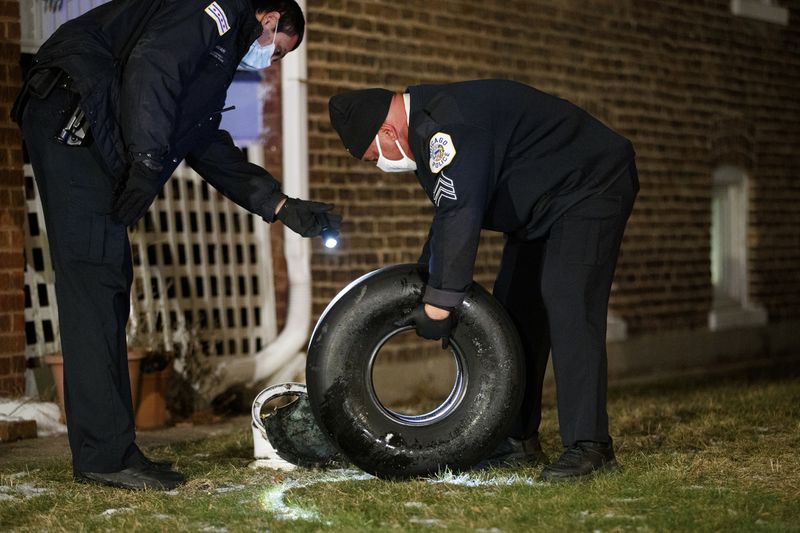 Shonah Grant and her husband just returned from a Thursday evening stroll through their Jefferson Park neighborhood when they noticed something in their yard.

“It was totally bizarre,” Grant said of the incident, which happened about 6:45 p.m. in the 5500 block of West Leland Avenue.

“I saw something in the yard. I thought, well, that’s weird, I never saw that before. It looked like a (tire) rim.”

They walked closer and then saw more debris in the yard. “Then, there was a tire by our front porch!” Grant said.

She and her husband assumed it was garbage somebody had dumped, so they lugged the heavy wreckage into their alley, thinking the scrappers would take it.

“I just felt puzzled by the whole thing,” she said.

A little later, while in her kitchen making dinner, it dawned on her.

She called a friend, a retired airplane mechanic, who came right over.

“That’s definitely from a plane tire. It looks like a smaller plane,” he confirmed.

The couple’s four children were all home at the time.

After speaking to her neighbors, she learned the wheel likely hit her neighbor’s yard first, just on the edge of her sidewalk, going into her backyard, Grant said.

“Then, as it broke apart, it fell into our yard.”

“It was crazy — it fell literally between the two houses,” Grant said.

As they were moving the debris back to where they found it, Chicago police officers got there.

“Police came up and so then we just dropped them, and they didn’t want us to move them again,” Grant said.

The officers also told the Grants a plane had reported it lost a wheel.

At approximately 6:19 p.m., O’Hare airfield operations was notified that a plane landing on Runway 28Center was sending off a considerable amount of sparks from the landing gear on the left side of the aircraft, according to an emailed statement from the Chicago Department of Aviation (CDA).

The plane landed safely and continued to a complete stop on the runway, and an emergency response was initiated. At that time, it was discovered that the left landing gear assembly was missing, the CDA statement said.

No injuries were reported, and five passengers and two crew were transported to Terminal 5.

The flight is Boutique Air 835, an air service route between Chicago and Ironwood in Michigan’s Upper Peninsula. The aircraft is a single-engine Pilatus PC12. Runway 28Center was taken out of service, but air traffic operations were normal at O’Hare as of about 9:45 p.m., the statement said.

As of about 7:45 p.m., several houses in the area had been cordoned off and multiple police officers were on the scene as well as at least two television stations. “We’re waiting for the FAA to get here,” Grant said.

Grant feels grateful it did not hit their home or injure anybody. “It would have gone through the roof if it hit the roof.”

“It is a little freaky because where we live, we’re right in a flight path to O’Hare. We have massive planes that fly over,” Grant said. “Thank God it was a small plane, but it’s really surreal.” 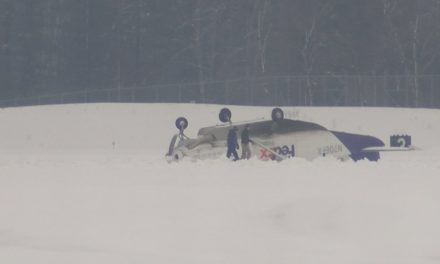 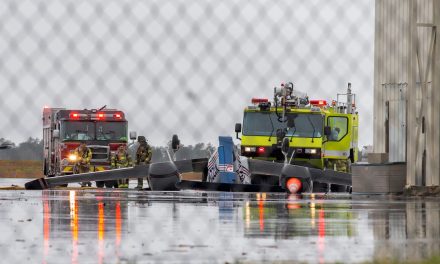 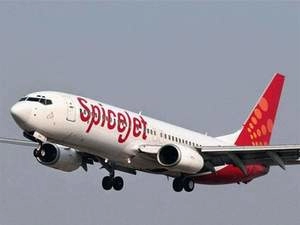