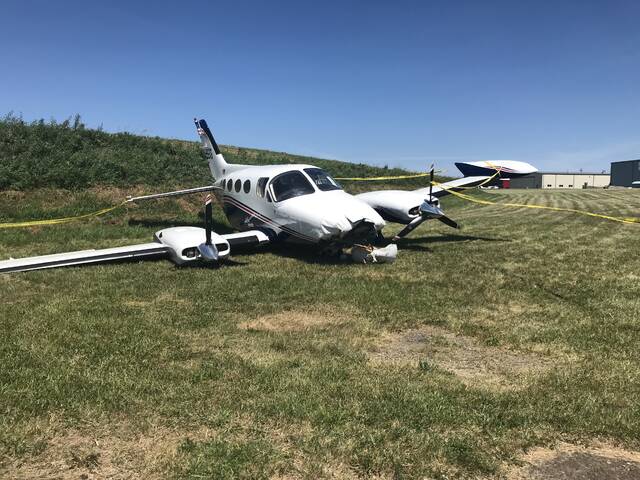 No injuries were reported when the pilot of a Cessna 414 lost control of its brakes Sunday afternoon, causing the airplane to crash at the Rostraver Airport.

Caiolinn Ertel, 61, of Pittsburgh was flying from Leesburg, Va., to Rostraver, where her plane is based, when she realized she had lost control of her brakes.

Ertel said everything was working when she took off. It was when she went to land that she realized something was wrong.

“Landed, and when I’m way down, I put the flaps up and I said, ‘I’m not coming to a stop.’ So I’m stomping on the brakes trying the get it to stop, nothing’s happening,” Ertel said. “Realize it’s not going to and so I shut the engines down, put the fuel off and then tried to do a controlled crash.”

Ertel guided the plane off the runway and over a small hillside where it came to a stop. The nose of the plane and the wings were damaged.

“I wasn’t going maybe 10, 15 mph and the engines were shut off, so there should be no engine damage – but I don’t know, the plane may be totaled,” Ertel said. “We’ll see what happens. It’s a 45-year-old airplane, though most everything’s new on it.”

There was no damage to the airport or runway. No fuel leaks were reported from the plane.

An official on the scene said they were trying to decide whether they would move the aircraft or keep it where it is for the time being.

Several crews responded to the scene, including the Rostraver Central Fire Department and a medical helicopter in case of injuries.