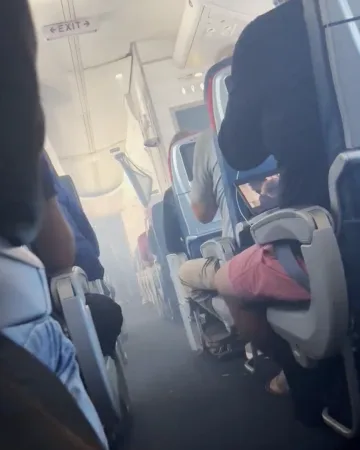 Flight 2846 was bound for Los Angeles from Atlanta when it was forced to make the emergency landing in Albuquerque on Tuesday.

A Delta Air Lines flight from Atlanta to Los Angeles was forced to make an emergency landing in Albuquerque on Tuesday after the plane’s cabin appeared to fill with smoke, the airline said.

Flight crew members then also observed a performance issue with one of the aircraft’s two engines, prompting the diversion, the spokesperson said Tuesday. It was unclear whether the smoke was related to the engine issue.

“Everything was normal and then suddenly there was smoke in the cabin,” Mason Weiner, a passenger on the flight who captured video of faint smoke flooding the plane, told NBC News on Tuesday.

“Someone started yelling there was a fire, but the flight attendants (in a very professional way) told everyone to chill, it wasn’t a fire, and keep seated,” Weiner said.

The plane landed safely at Albuquerque International Sunport and Delta said its teams were arranging for the flight to continue on another aircraft due to arrive in Albuquerque later Tuesday evening. The airline did not immediately respond to a request for updates early Wednesday morning.

Weiner said the plane had been met by a “full welcome of fire trucks and everything” when it landed in Albuquerque. He said he and other passengers were waiting for a new plane to arrive to transport them to Los Angeles. He added that Delta had “ordered Chick-fil-A for everyone.”

“Nothing is important than the safety of our customers and crew. “That’s why our flight crew followed procedures to safely divert today’s flight 2846 to Albuquerque,” the Delta spokesperson said, apologizing for the delay to passengers’ travel plans.