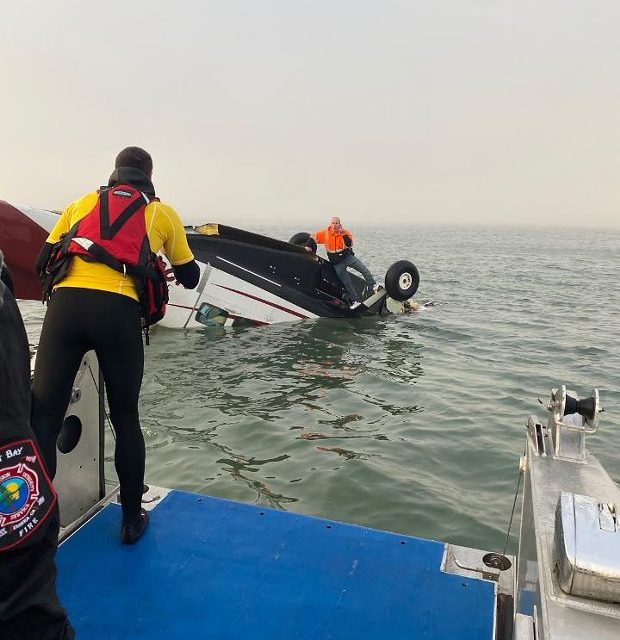 The Humboldt County Sheriff’s Office reports that deputies are plucking what appear to be Amazon packages that were inside the plane that crashed into Humboldt Bay this morning out of the water.

The pilot was rescued in “good condition” and the Federal Aviation Administration is investigating the cause of the crash.

Humboldt Bay Fire reports the pilot “suffered no major injuries” and was taken to St. Joseph Hospital for “observation and treatment of minor cold exposure.”

A pilot was rescued from atop his partially submerged plane after crashing in Humboldt Bay this morning.

The pilot reportedly called 911 while standing on the plane’s landing gear as it was sinking into the bay shortly before 7:30 a.m.

“A pilot just landed in the Bay,” the dispatcher reported.

The pilot reported he was on the east end off of Woodley Island, according to the dispatcher. He told her he could hear a responding helicopter but couldn’t see the Samoa Bridge because of dense fog.

Firefighters and the U.S. Coast Guard responded but had difficulty finding the plane due to the fog. At about 7:40 a.m., the pilot reported to the dispatcher that he could see the U.S. Coast Guard helicopter, which was still having trouble locating him. A few minutes later, the Humboldt County Sheriff’s Office launched a rescue boat.

Shortly after 7:50 a.m., the Coast Guard helicopter told the dispatcher it was lowering its hoist with a rescue swimmer to the downed plane. At 7:55 a.m., the dispatcher reported the crew had recovered the pilot and was en route to St. Joseph Hospital.

With the pilot safely transported, crews from various agencies have turned their attention to the plane and voiced concerns about the potential for a fuel spill in the bay.

On 02/06/2020 at 7:24A.M., Humboldt Bay Fire resources were dispatched for a water rescue in Humboldt Bay near Woodley Island along with the U.S. Coast Guard.

A single-engine Cessna plane carrying one pilot had crashed into the Bay after losing visibility in the fog attempting to land at Murray Field.

Working together with the U.S. Coast Guard Humboldt Bay boat and helicopter, Humboldt Bay Fire Water Rescue Team members boarded a Port Authority vessel and began a search for the plane in the water which was heavily impeded by heavy morning fog. Land resources including fire engines, command, and Sheriff’s vehicles patrolled the boundaries of the bay attempting location as well.

The pilot was located at 7:49A.M. atop his overturned plane and was pulled out of the water by Humboldt Bay Fire personnel at 7:52A.M, just 28 minutes after the initial dispatch. We are happy to report that the pilot suffered no major injuries, and has been transported to the hospital for observation and treatment of minor cold exposure.

Humboldt Bay Fire would like to acknowledge the work of the U.S. Coast Guard Sector Humboldt Bay, Humboldt County Sheriff’s Office for scene control, unified command, and water search, the Harbor District and Port Authority for their cooperation and resources, as well as Eureka Police Department 9-1-1 Dispatch who remained on the line with the pilot and aided in his discovery.

This incident highlights the efficiency of work that can be accomplished when our joint agencies work together, and we are so thankful for the relationships we have with our partner agencies. 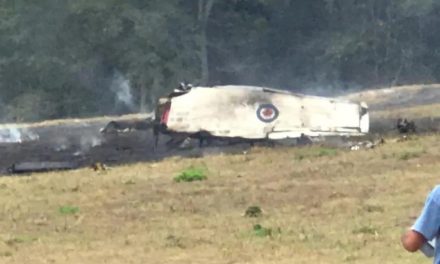 Snowbirds pilot safe after ejecting from plane in Georgia crash