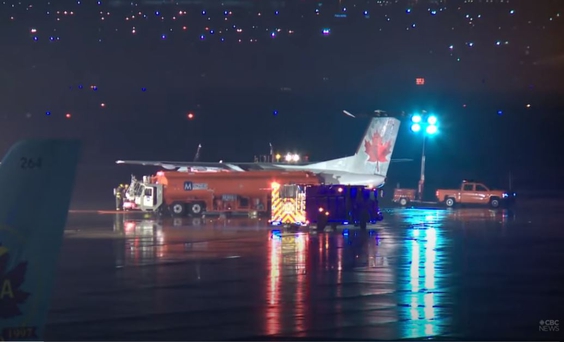 The Transportation Safety Board has released its report into a crash between a Jazz Aviation LP flight and a fuel tanker at Pearson airport in 2019 detailing how passengers ignored and threatened staff to be let off the plane.

The safety board says the flight bound for Sudbury was unable to land, returning to Toronto at 1:26 a.m. on May 10, colliding with a fuel tanker while taxiing.

The report notes that despite instructions from a flight attendant, one passenger climbed over their seat to open an emergency window exit and subsequently jumped from the plane.

The flight attendant opened the main door exit two minutes after the crash after facing a threat from one passenger and pressure from several others.

One crew member, one infant and 13 passengers suffered injuries.

The Transportation Safety Board says visibility was a factor in the crash.

But its findings focused on the conduct of passengers.

“Many passengers ignored the instructions from the flight attendant to remain seated and calm; some were gathering their bags from the overhead compartments, and some were escalating the panic by yelling that they needed to get out of the aircraft,” the board noted, adding that some passengers attempted to reboard the flight after disembarking.

The company responsible for operating the fuel tanker has since added rear- and side-view cameras to help with visibility.