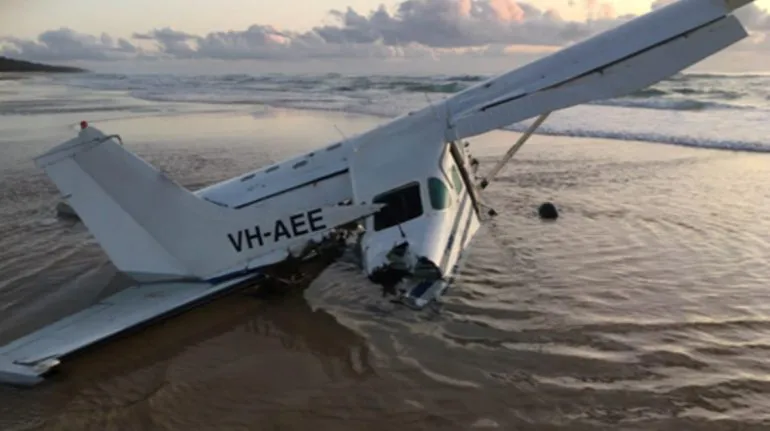 A 61-year-old pilot of a Cessna 206 that crashed into the sea near Fraser Island kicked in the rear door to escape – before heading back underwater to the submerged wreckage to find his 20-year-old trainee.

The heroic act of Air Fraser Island chief pilot Gerry Geltch was buried deep in a recent ATSB report on the incident, which revealed how the aircraft’s rudder became jammed upon landing, causing it to veer off the runway and strike waves before getting airborne again. However, soon after, the Cessna’s engine cut out causing it to crash into the water and submerge.

Both pilots survived with only minor injuries.

Talking to Australian Aviation, Geltch said, “He was my staff member, he was my priority. I think when you’re a father, you just think about if it were your kids. It just is what it is and you do what you have to do.”

The ATSB report highlighted crucial safety issues with the Cessna 206’s cargo door that could lead to “fatal consequences” in the event of a ditching. As a consequence, the organisation has issued a safety recommendation to the aircraft’s manufacturer and regulatory authorities in both the US and Australia.

Talking through the dramatic moments, Geltch told Australian Aviation, “I was doing initial training with a new staff member when we experienced a component failure in the steering and braking system upon landing. From there, the issue just compounded until the engine finally gave out over the water, and we had to put it in the ocean.”

The ATSB revealed the damage upon the initial landing resulted in the rudder becoming jammed in the full-left position, and the aircraft veered to the left, towards the sea.

At this point, Geltch took control over the aircraft to conduct a go-around manoeuvre, a decision that he believes could have saved his and his trainee’s life, despite some earlier criticism of the choice.

“If I didn’t take over and attempt a go-around to get the aircraft airborne before it went into the ocean into the waves, it would have been a far, far different outcome, because we would have ran right into the ocean, hit the waves and rolled over.

“And then we would have just tumbled and tumbled through the water – it would more than likely have been catastrophic.”

Upon taking control of the aircraft, Geltch, now 62 but 61 at the time of the incident on 29 January 2020, explained that he entered total problem-solving mode, as the aircraft continued to showcase damage, and ultimately failed.

“The only thing that was really going on in my head was troubleshooting the situation that we were in, nothing more than that,” he explained.

“At that time, we essentially saw about three or four different disasters that happened one after the other, which got us into this position that we were in. So you had to think and deal with each different situation as it arose, basically every 30 seconds, a new problem to fix.”

According to the veteran pilot, following the go-around, he had largely regained control of the flailing aircraft and was confident he could fly it back to land.

“I had done all the troubleshooting I needed to do and actually thought ‘Gee, I could probably fly this back to Hervey Bay’,” Geltch explained, before ultimately deciding just to return the plane to land on the beach, to be safe.

But unfortunately for Geltch and his young trainee, another disaster was awaiting around the corner – literally.

“We were performing a turn to come back into land, and the engine just cut out,” he said.

“It looks like when we saw that damage to the front end, it looks like it must have taken out the fuel lines, which we obviously didn’t know until the engine cut, because the tanks were still three-quarters full.”

So, in light of another disaster, Geltch was luckily able to manoeuvre the aircraft into the water without seeing it roll over, and – in another unfortunate event – the two pilots struggled to exit the aircraft. Despite the problems, Geltch made it his absolute priority to see his 20-year-old trainee make it out safely.

“When it hit the water and I realised that we’re both still conscious and alive, that’s when I said, ‘quick, crack the door’, because with 206s there’s only a door on the pilot’s side,” he said.

“We tried to push it out but by that time we were sitting in too much water and there was too much pressure on the door to open it and get out, so I went down the back of the aircraft and kicked the back door out.”

At this point, the cabin was nearly three-quarters filled with water, and after kicking out the back doors and exiting, he decided to swim back into the aircraft, and move back to the front to get his trainee out of the wreckage.

“When I did that, he wasn’t there, he was gone, and I thought ‘Shit, where the hell did he go?!’” Geltch said.

“So, I swam over the seat and under the water to look down underneath the dash, in case he was caught down there, and no, he wasn’t there either. I kept looking but couldn’t see him anywhere.

“Unbeknownst to me, when I had gone to kick out the back door, he actually opened up the little pilot window, and because he was only 20 and light and small, he managed to climb out that window and he got himself out.”

Geltch said that he then exited the aircraft again, and finally saw that his trainee had made it out and swam to the surface. Geltch then decided to go back into the aircraft a third time to grab life jackets.

“There were six life jackets in the aircraft but when I went back in to get them, I only saw one so I grabbed that, but I really wasn’t comfortable spending any more time in there as it was beginning to fully submerge,” he said.

Upon coming back up to the surface, Geltch fixed the life jacket to his trainee, and the two began their swim to shore. They were shortly met by a paramedic from the Happy Valley ambulance station who entered the water to assist them to shore.

Miraculously, both men only reported minor injuries due to the incident.

Geltch downplayed his heroic decision to re-enter the aircraft multiple times in order to ensure the safety of his trainee, both through ensuring he exited the aircraft, and securing him with a life jacket, saying simply, “you do what you have to do.”

He said the aircraft had only just been acquired by the company a few weeks prior to the incident, and that the company had not been made aware of any mechanical issues with the plane.

Despite this, Geltch remained adamant that in aviation, emergencies are inevitable, and it’s all about knowing how to handle such a situation.

“Anything mechanical has the capacity to fail, we all know that,” he said.

“We prepare as best we can, and introduce safety procedures, but sometimes things just fail and it’s just about knowing what to do, and handling that situation.”

Following the incident, the ATSB has recommended that the manufacturer amend the procedure for ditching and forced landing in the Cessna 206, “to ensure pilots are aware that extending the flaps beyond 10 degrees will significantly restrict emergency egress via the cargo door”.

“Separately, the ATSB also recommends that the Federal Aviation Administration and Civil Aviation Safety Authority take safety action to address the certification basis for the design of the cargo door in the Cessna 206,” said the ATSB’s director of transport safety, Stuart Macleod. 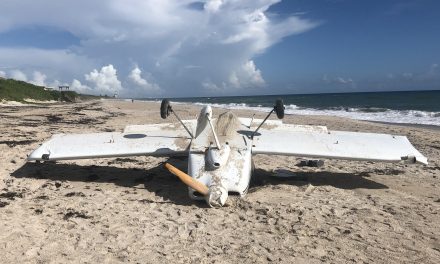