A Fedex Federal Express Boeing 767-300 freighter, registration N146FE performing flight FX-1026 from Newark,NJ to Los Angeles,CA (USA) with 2 crew, was on final approach to Los Angeles’s runway 24R when the crew received an unsafe gear indication, the left main gear was not down and locked.

The aircraft went around and entered a hold at 5000 feet while the crew was working the checklists. The aircraft subsequently performed a low approach to runway 24L, an inspection from the ground could not solidly determine whether the left main gear was down, the gear doors were open. Tower offered to have somebody placed to the runway for another inspection from the ground, the crew decided to perform another low approach.

The aircraft positioned for another approach to runway 24L descending to about 300 feet now. Operations vehicles placed along the runway reported the left main gear did not appear in position.

The crew advised they needed to talk to operations and maintenance, but they suspected there was not a lot more they could do.

The aircraft entered another hold at 5000 feet for about 40 minutes, then performed a partial gear down landing on runway 25R about 45 minutes after the second low approach.

The aircraft came to a stop on the center line of the runway sitting on its nose gear, right main gear and left engine cowling.

The crew evacuated the aircraft through the cockpit window via a rope. One of the pilots received injuries during the evacuation. 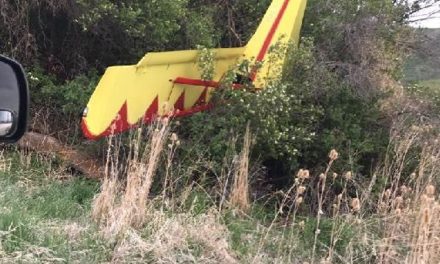