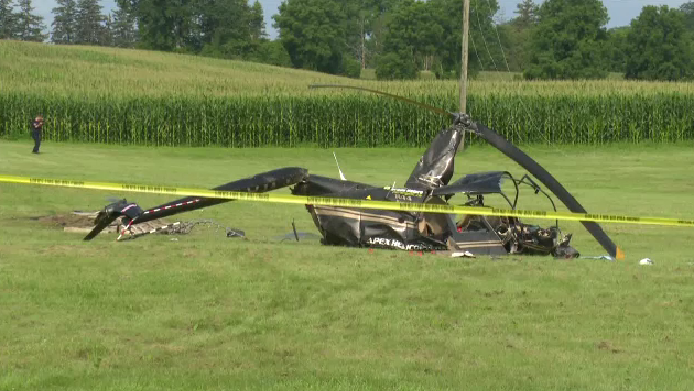 The Transportation Safety Board of Canada (TSB) has released its investigation report into a July 2021 helicopter accident in Brantford.

In the early morning on Jul. 25, 2021, a Robinson R44 helicopter operated by Apex Helicopters Inc. departed from a field on the outskirts of Brantford on a reconnaissance flight.

After the reconnaissance flight, the pilot began to spray, which requires flying at a height of less than 10 feet above the crops. At the end of the first spray run, TSB said the helicopter struck wires, became uncontrollable and crashed approximately 270 feet from the wire strike location.

The pilot, who was the sole occupant on board, was seriously injured and the helicopter was destroyed.

The investigation found that the wires were lower than other nearby wires and were along the edge of the corn field. Additionally, the eastbound portion of the reconnaissance flight path and occurrence flight path were both conducted directly towards the sun, said TSB in a media release. The sun’s glare, possibly combined with spray fluid or debris, affected the pilot’s visibility.

The investigation also determined that the pilot’s exposure to the risk of wire strike likely altered the pilot’s risk perception and negatively influenced the thoroughness of the reconnaissance.

The combination of the ineffective reconnaissance, location of wires, and impaired visibility is believed to be what resulted in the pilot not seeing the wires during the first spray run.

Wearing a flight helmet, fastening the lap belt and shoulder harness helped to reduce the severity of the injuries to the pilot.

The board said it was not aware of any safety action taken following the incident.