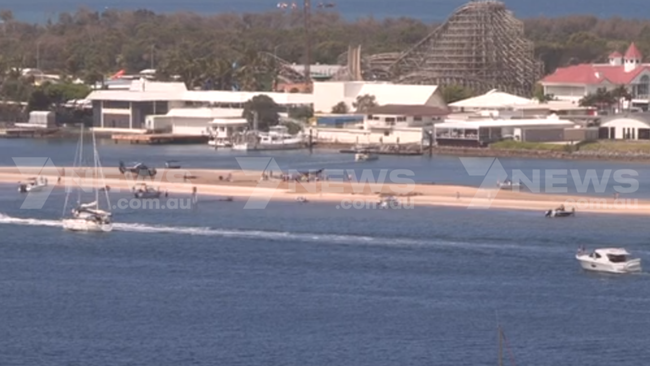 Sea World Helicopters said it is ‘cooperating with all the authorities’.

Four people have died and three others are in a critical condition after two helicopters collided in mid-air at Main Beach on the Gold Coast.

Emergency services were called to the scene following reports of the crash at about 2pm on Monday.

People on jetskis and in boats rushed to help the victims at the small sandbank before paramedics and police arrived on the scene.

They were confronted with a “significant incident”, Worrell said.

He said one of the two helicopters successfully landed after the collision, though its front was severely damaged.

“The other airframe has crashed and it was upside down,” he said.

Footage has since emerged of the two helicopters flying towards each other before they clip and one crashes into the sandbank below. 7NEWS.com.au has chosen not to show it.

Members of the public rendered immediate assistance, working alongside police to remove the people from the wreckage as it burst into flames – including at least one child.

They commenced first aid and tried to get those people to safety from the airframe that was upside down, Worrell said.

Jayney Shearman from QAS said they attended to 13 people from both helicopters.

“There were three critical patients that were treated and there were six with minor injuries that were all transported through to hospital,” she said.

“The minor injuries were mainly glass shrapnel that had come from the impact.”

Shearman said there were a number of critical injuries, “what we call multi-system trauma which means that there was a lot of impact to the body”.

In the initial stages, she said, it was very important to have some basic life support which was being conducted by first aiders.

Two people, a woman and a child were taken to Gold Coast University Hospital while another child was airlifted to Queensland Children’s Hospital.

Six other people are at Robina Hospital being assessed in the emergency department and it is understood some may be eventually transferred to Gold Coast University Hospital.

‘We heard a loud noise’

A Sea World visitor said they saw “one of the helicopters in a tailspin with the cockpit windows falling away after impact”.

Witness Jonathon James Spagnol said the crash happened after helicopters got too close, with one’s rear rotor sawing off the other’s.

“Look like one went up and one was coming back in. Chopped the back off the other landed on the sand bar. Was right behind us,” he wrote on Facebook.

“We heard a loud noise and saw bits of debris flying,” said another witness.

Seaworld Drive was closed off to all traffic following the incident.

Sea World Helicopters has expressed its shock and deepest sympathy for those involved in the helicopter accident.

A spokesperson said: “We and the entire flying community are devastated by what has happened and our sincere condolences go to all those involved and especially the loved ones and family of the deceased.

“We are cooperating with all the authorities including the Australian Transport Safety Bureau (ATSB) and the Queensland Police. As it is now a police investigation we cannot provide any further information at this stage.”

The ATSB stated they have commenced a transport safety investigation into the fatal mid-air collision, and are expected to arrive on the scene on Monday afternoon.

“During the evidence gathering phase of the investigation, ATSB investigators will examine the wreckage and map the accident site. Investigators will also recover any relevant components for further examination at the ATSB’s technical facilities in Canberra, gather any available recorded data for analysis, and interview witnesses and other involved parties,” it said.

“The ATSB asks anyone who may have seen the collision, or who witnessed the helicopters in any phase of their flights, or who may have footage of any kind, to make contact via witness@atsb.gov.au at their earliest opportunity. “

The police investigation is ongoing and a report will be prepared for the coroner. 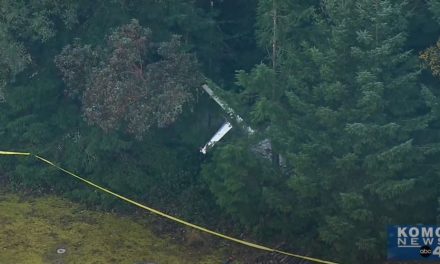