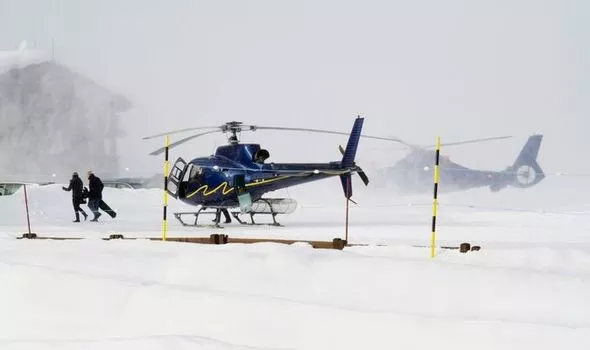 The aircraft was carrying five people and came down near the ski resort of Courcheval which is popular with British winter sports enthusiasts. Local officials said a large number of emergency services personnel, including high altitude specialists, had been deployed to the scene of the accident after the area’s SATER plan – a search and rescue operation for air crash victims – was triggered.

The Savoie prefecture has also opened its crisis unit and Albertville prosecutor Anne Gaches has announced an investigation has been launched.

A spokesman for the Savoie regional government said the civilian helicopter took off from Courcheval at 3.41pm local time.

He said the alarm was raised at around 5.20pm by a witness who saw the helicopter go down between Lac de la Rosière and Dent du Villard at an altitude of 1,900 metres.

The spokesman said: “First aid, the high-mountain gendarmerie and the fire service arrived on the site of the crash at 6pm.

“Departmental and extra-departmental helicopter resources are engaged to take care of the injured.”

According to local media, the helicopter belongs to Courcheval businessman Patrick Lepeudry.

The two other survivors suffered less serious injuries and are being treated in hospital in Albertville.

Ms Gaches said the investigation would be carried out by officers from the research section of the air transport gendarmerie.

The crash comes just two months after five men were killed when a rescue helicopter crashed during a training flight in the Alps.

The aircraft, owned by a private company, went down near the town of Bonvillard in the Savoie region. French authorities said the helicopter – a Eurocopter EC135 – was carrying an air rescue crew on a training mission when it fell from an altitude of 1,800 metres.