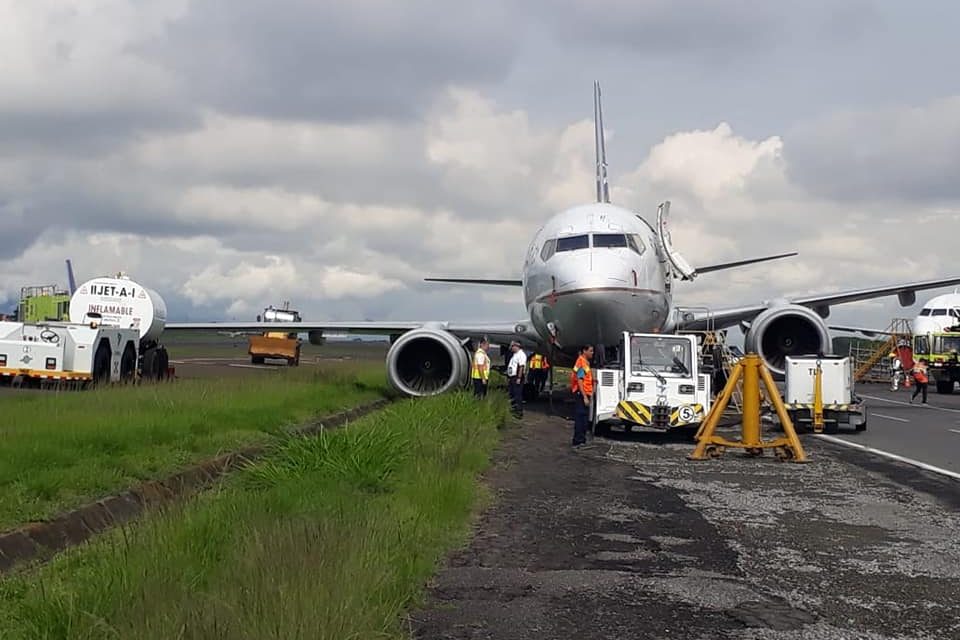 Copa Airlines undoubtedly has that sinking feeling today after one of its 737s got stuck in the mud. The Boeing 737-700 was being pushed back at San Jose International Airport in Costa Rica when a slight deviation from the intended course saw the aircraft’s landing gear sunk up to its wheel nuts in the soggy ground. It’s the second such incident today after British Airways had a 787 in Canada in a very similar situation.

A sticky situation for Copa’s 737

A Copa Airlines Boeing 737-700 has been damaged today in an incident at San Jose airport in Costa Rica. The 20-year-old 737 has not flown since mid-March but was undergoing maintenance at the airport and needed to be moved.

Registered HP-1374CMP, the Boeing 737 was apparently in the process of being pushed back from a maintenance hangar at San Jose International Airport (SJC). As it was navigating onto the runway, it had to swing rather wide to avoid colliding with a Coopesa aircraft being stored nearby.

It seems the tug driver misjudged the distance required and caused the landing gear to leave the runway surface.

With the weather in San Jose currently hot and stormy, the area has endured a few days of very heavy rain. This has typically caused the ground to become soggy, including the verge adjacent to the runway. As such, the landing gear sank deep into the mud, tipping the plane at a hair raising angle and causing the engine to make contact with the ground.

The aircraft body seems to have escaped the incident unscathed, but the starboard engine can be seen resting on the grass. Whether this will have caused damage remains to be seen and will largely depend on the speed and force of the impact. It’s likely the landing gear may also be damaged.

Twice in one day?

The news of the incident in Costa Rica comes just hours after it was revealed that a Boeing 787 Dreamliner belonging to British Airways got stuck in the mud in Edmonton, Canada, while being pushed back prior to a flight.

In a surprisingly similar situation, the Dreamliner was pushed just a little too far, causing a wheel to leave the runway and end up in the soft ground to the edge. In defense of Edmonton Airport’s ground ops, the incident happened in darkness, so there were some mitigating circumstances here.

The Copa aircraft, on the other hand, was in full daylight when the incident occurred. However, the obstacle of another aircraft on the runway likely made it a slightly out of the ordinary pushback.

With aircraft parked on runways and taxiways all over the world for storage, and ground crew perhaps a little out of practice, we could see more similar incidents happening before the world’s fleet begins to fly again.

While the British Airways Dreamliner will undoubtedly be pulled out of the mud and sent on its way, the end of the story for the Copa 737 might not be as happy. With potential damage to the engine and already 20+ years of service under its belt, this could be the final straw for HP-1374CMP.