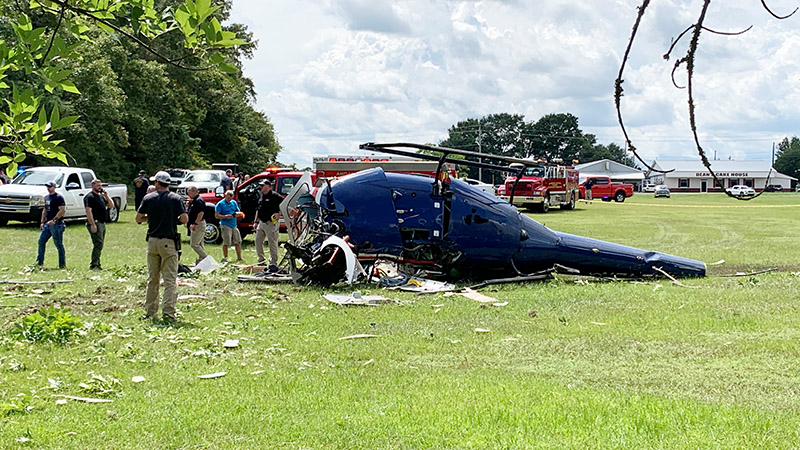 “Today, an Air Methods aircraft experienced an accident in Andalusia, Alabama. The AS 350 aircraft was from the Life Saver program based in Evergreen, Alabama. There was no patient on board and the crew have been taken to the hospital and are receiving medical evaluation and care. The FAA and NTSB have been made aware of this incident and investigators are enroute to assess the situation. Our team will cooperate fully with their efforts to assess the cause of this unfortunate accident. Privacy rights with regards to those on board the aircraft will be honored, and we will not be sharing any additional information,” said Air Methods Vice President of Communications Denisse Coffman.

THE CITY OF ANDALUSIA HAS PROVIDED THE FOLLOWING INFORMATION:

The downed helicopter was an emergency vehicle and NOT the Friends of Army Aviation U1-H1 “Huey” that had been giving rides in the opposite corner of the same field earlier in the day.

Chief Hudson said the National Transportation Safety Board does not plan to investigate this crash. However, the manufacturer of the helicopter, Airbus, is flying a team in from Wisconsin to inspect the aircraft, and the manufacturer of the engine also plans to come to the scene. Those inspections will not happen until Saturday afternoon.

The portion of Packer Field where the crash occurred will remain secured until those investigations are completed. Members of the Covington County Sheriff’s Reserves are providing assistance securing the scene.

Packer Avenue will reopen as soon as City of Andalusia Utilities completes the process of replacing the five power poles that were broken or damaged by the crash.

At least three people were involved in a medical helicopter crash in Andalusia Friday afternoon.

While specific details about the crash are unknown, officials with the Federation Aviation Administration were said to be traveling to the scene to investigate. The helicopter did bring down power lines in the area of Packer Avenue down to its intersection with Church Street. Tops of trees along Packer Avenue, adjacent to Packer Field, were damaged as the helicopter came to the ground on that corner of Packer Field.

According to reports, Covington County Sheriff Blake Turman said the helicopter was traveling to a hospital when it began having difficulties and crashed. A pilot and two medics were inside the helicopter were on board.

Local first responders quickly set up a perimeter around the craft as medical personnel treated the injured. One person was life-flighted from the scene while witnesses at the scene said two others were taken by ambulance to Andalusia Health. The sheriff said the pilot was seriously injured and the two medics were injured.

Coincidentally, the Friends of Army Aviation was set up at the opposite corner of Packer Field providing rides on the Vietnam-era UH-1H helicopters. Billy Doaner, an Andalusia resident, was receiving safety training in preparing to take one of those rides when the crash occurred. He was among the first on the scene.

“I was going to take a flight on the Huey and a transformer blew about 50 yards from me over my left shoulder. I thought to myself, that was big explosion. I looked over to my right and, because the prescription in my glasses isn’t the greatest, it took me about five seconds to register an upside-down helicopter. I bolted and ran. When I got there I saw the pilot hanging upside-down. My first reaction was to see if anything was burning or leaking fuel. I didn’t want to move anybody, but if there was fire or smoke, I would have tried to get them out of there,” Doaner said.

Doaner said others on the scene helped us much as they could, but everyone quickly backed away as first responders got to the scene.

Pearl Wheeler was sitting in her home directly across the street from where the helicopter crashed.

“I was sitting right by my window and heard the limbs (breaking). I stood up, looked out and hollered ‘Oh God, Oh God’ and ran to the door. I don’t think it had even come to a halt, the rotors were still beating the dirt. I was afraid it was going to explode,” Wheeler said.

Following the crash, City of Andalusia Utilities crews began working to restore five power lines that were broken when the helicopter crashed.

A medical helicopter crashed off Packer Street in Andalusia in an empty field across the street from Dean’s Cake House Friday afternoon.

The downed helicopter was an emergency vehicle and not the Friends of Army Aviation Huey helicopter, which is giving rides today and Saturday.

There are a number of power lines down in the area. Motorists should avoid the area at this time. City of Andalusia and EMA personnel are on the scene along with first responders.

Editor’s Note: The Star-News will update this story as more information becomes available.

A corrupt file led to the FAA ground stoppage. It was also found in the backup system 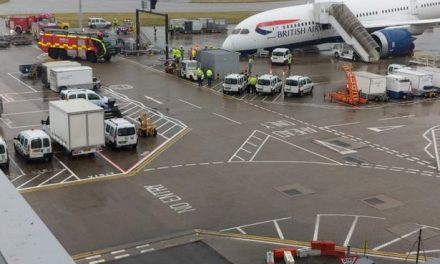