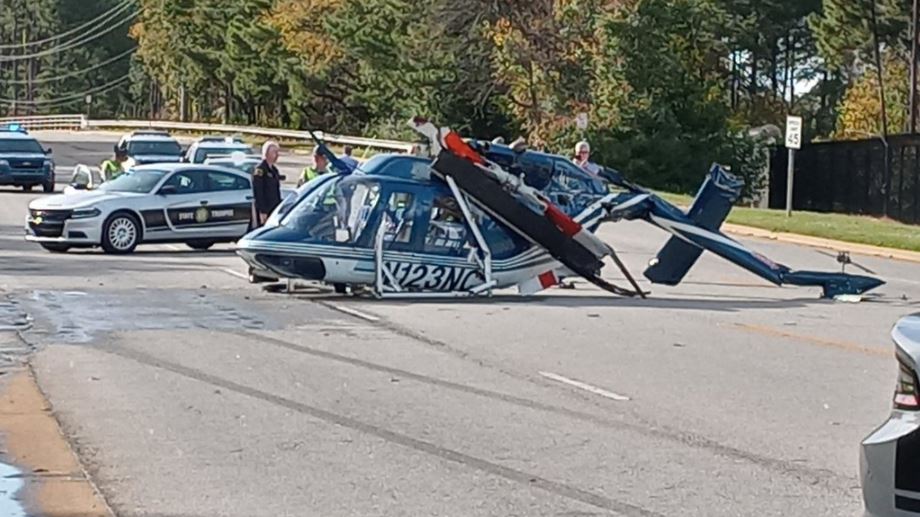 No injuries were reported in the crash, which happened just after 2 p.m. near the intersection of Garner Road and East Tryon Road, according to North Carolina State Highway Patrol Master Trooper Chris Knox.

The North Carolina State Highway Patrol helicopter facility is in the area where the crash happened.

There is no word on how the crash happened. Tryon Road is closed at Hammond Road because of the crash.

In photos from the scene, the damaged aircraft could be seen in the middle of a street. One photo showed the main rotors were destroyed and the tail section was twisted. The landing skids were bent upward and tail rotor was also bent and destroyed.

Knox says the pilot was the only person aboard the aircraft when the crash happened. Knox says the Federal Aviation Administration will be involved in the investigation.

He says the aircraft, a 1971 Bell 206B helicopter owned by the North Carolina State Highway Patrol, appears to be a “total loss” based on initial observations.

In 2018, a North Carolina State Highway Patrol helicopter crashed because the helicopter was still clamped to one side of the transporter used to take it to the heliport, according to a report from the National Transportation Safety Board.

The Bell OH-58A, N303HP, operated by highway patrol, crashed upon takeoff on June 19 and suffered substantial damage, the report shows.