The airplane came to rest in a cornfield, at an elevation of 140 ft, upright, with the wreckage oriented on a 230° heading. All major components of the airplane  were located in the vicinity of the main wreckage. The airplane struck multiple rows of corn prior to impacting the ground. The left wingtip red-light lens cover was located in the vicinity of the first ground impact scar. The first vegetation strike was about 155 ft from the main wreckage and there was an odor of fuel at the accident site.

The left-wing tip was impact separated and was located about 140 ft before the main wreckage. The inboard section of the left wing remained attached to the fuselage with the outboard 20 ft impact damaged and bent aft. Flight control continuity was confirmed from the ailerons to the flight controls in the cockpit through multiple overload breaks in the push/pull rods. The engine remained attached to the airframe engine mounts. The front reduction gearbox was impact separated and remained attached to the propeller hub. Remnants of the front reduction gearbox flange remained attached to the power section of the engine. Multiple gear teeth on the reduction gearbox exhibited rotational scoring. The exhaust stacks were removed to facilitate examination. The 2nd stage power turbine remained intact and one of the blade tips was impact separated and located at the accident site in the vicinity of the engine with multiple turbine blades exhibiting trailing edge damage. Rotational scoring was noted on the power turbine section case. Furthermore, the sections of the exhaust duct exhibited torsional/compression damage.

The airplane was equipped with a 5-blade Hartzell controllable pitch propeller. Two of the 5 propeller blades were impact separated from the hub and located along the debris path. The other 3 propeller blades remained attached to the hub. Multiple blades were bent the opposite direction of travel and exhibited chordwise scratching. Furthermore, one blade exhibited leading edge gouging.

An Electronics International MVP-50 engine data unit and a SatLoc Bantam unit were removed and sent to the NTSB Recorders Laboratory for data download. 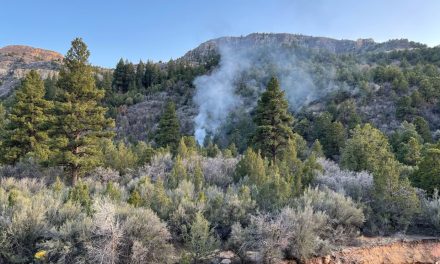