On June 21, 2021, about 1615 central daylight time, an Ayres S2R-T34 airplane, N4328P, was involved in an accident near Leoti, Kansas. The commercial pilot sustained minor injuries, and the airplane sustained substantial damage. The airplane was being operated as a Title 14 Code of Federal Regulations Part 137 aerial application flight.

According to the pilot, prior to the flight, the 510-gallon hopper was loaded with 10 ounces of FoamBuster Max, 62.5 gallons of Buccaneer 5 Extra herbicide, 300 gallons of Kugler KQ-XRN fertilizer, and 87.5 gallons of water (450 gallons total mixture). While on his second spray pass, the pilot noticed the chemical mixture was reacting and foaming over and through the hooper vent. He pulled the airplane out of his second pass and also noticed chemical foaming out of the overflow vent. He then looked forward and observed the chemical reacting violently, and it began to emit from the hopper lid. The windshield became fully obscured with foam, and the pilot was unable to see anything outside the airplane. The pilot opened the window in attempt to determine his altitude when the airplane impacted terrain in a wings-level attitude. The airplane skidded on the terrain and came to rest upright.

The airplane sustained substantial damage to both wings and the fuselage. 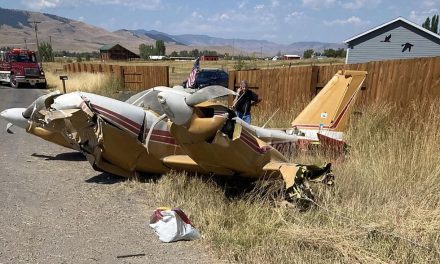