On February 16, 2022, about 1707 eastern standard time, a Beech 58 airplane, N58LF, was destroyed when it was involved in an accident near Lexington, North Carolina. The private pilot was fatally injured, and the driver of the tractor-trailer and a passenger of that truck sustained minor injuries. The airplane was operated as a Title 14 Code of Federal Regulations Part 91 personal flight.

Three witnesses who were on the airport ramp observed a portion of the takeoff roll, rotation, and initial climb before losing sight of the airplane just before impact. One of the witnesses, who flew for a major airline, reported that the right engine was spewing dense white smoke that the airport video did not accurately depict. Airport security video captured white smoke trailing the airplane about the time the airplane rotated and continued until the airplane went out of sight of the camera, about 1/2 way down the runway. The witnesses noted the airplane level off or decrease the nose-up pitch attitude, with one reporting hearing engine gyrations which he either associated with one engine failing or the engines being out of sync.

Video taken from a truck that was travelling in the middle lane of the three-lane highway behind the impacted truck depicted the airplane in a very slight nose-up attitude immediately before impact. The video did not depict the collision with the truck but did depict the resulting fireball and heavy black smoke. It also depicted the tractor-trailer rolling onto its side, and vehicles in very close proximity to the fireball stopping or maneuvering to avoid the fireball.

The driver of the impacted truck reported he was travelling at 65 mph, and he felt the trailer contacted by something. The truck turned over and he and the passenger climbed out of the cab on the passenger side. 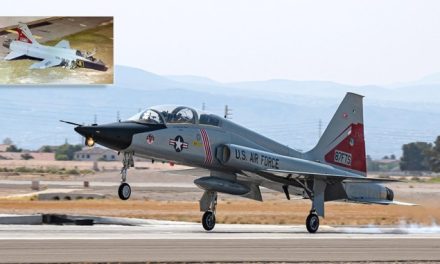