The Airplane Entered A Right Descending 270° Turn From About 2,100 Ft MSL

On June 1, 2021, about 1720 eastern daylight time, a Beech A23, N8780M, was substantially damaged when it was involved in an accident near Pinnacle, North Carolina. The student pilot was fatally injured and the flight instructor sustained serious injuries. The airplane was operated as a Title 14 Code of Federal Regulations Part 91 instructional flight.

The airplane made a right turn and tracked northwest, then east, performing a series of turns, climbs, and descents, consistent with maneuvering flight. About 1718, while flying on an easterly track, the airplane entered a right descending 270° turn from about 2,100 ft msl. The last ADS-B target was observed at 1719 as the airplane descended through 1,075 ft msl at a groundspeed of 64 knots, about 16 miles northwest of INT. The local elevation at the accident site was about 1,000 ft.

Examination of the accident site revealed that the airplane impacted a grass field on a residential property. The wreckage debris path was about 65 ft-long and oriented on a magnetic heading of 287°. There was no postimpact fire and all major structural components of the airplane were located within the debris field. All flight control cables were continuous from the cockpit controls to the control surfaces. Manual manipulation of the aileron, stabilator and rudder cables operated their respective control surfaces. The outboard portion of the left wing came to rest inverted and next to the inboard portion of the wing. The left wing was impact-separated from the fuselage at the wing root, the aileron cables remained attached. The empennage separated from the fuselage and came to rest behind the cabin, the elevator and rudder cables remained attached. The engine was partially separated, the fuel hoses, throttle and mixture control cables remained attached. The nose and right main landing gear were separated.

The engine fuel supply system remained intact. The fuel boost pump switch lever was fracture separated, but the remaining portion was in the “ON” position. The left fuel tank was breached, the right fuel tank remained intact and contained about 1 pint of aviation fuel which was free of water and debris.

Grass blighting was evident at the initial left wing impact location and continued along the wreckage path to the main wreckage. The fuel outlet strainers in each wing, and all fuel supply lines and vents were free of  obstructions. The fuel flow divider and fuel injector lines did not contain any fuel. The fuel flow divider was disassembled and found to be free of debris. The fuel line from the engine-driven fuel pump to the fuel metering assembly contained fuel and the line from the fuel metering assembly to the flow divider contained a small amount of fuel. The fuel selector valve contained a small amount of fuel. None of the fuel supply lines from the firewall forward were breached. The electric fuel boost pump was removed and hooked up to a power supply; it was successfully operated and pumped water.

Both magnetos were removed and manually operated. The right and left magnetos produced spark on all leads. The top spark plugs were in new condition when compared to a Champion Spark Aviation Check-A-Plug chart AV-27. The engine was manually rotated through several 720-degrees of rotation; continuity was confirmed and thumb compression was verified on all cylinders. Each of the cylinder valves appeared well lubricated and their associated rockers and springs functioned smoothly. There were 6 quarts of oil inside the crankcase and the oil filter was cut open and the filter pleats were free of any ferrous material or debris. The propeller remained attached to the crankshaft flange. Blade A was unremarkable, and Blade B was uniformly bent aft around the engine. Blade B was cut from the hub to facilitate engine rotation. Neither blade exhibited leading edge gouging or polishing. 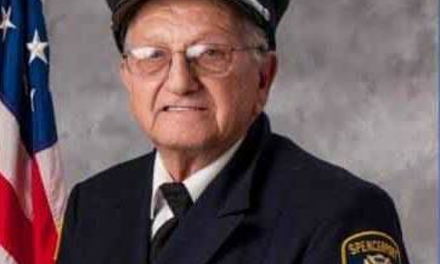