About 4 Miles From The Runway, The Engine “Sputtered A Couple Of Times And Quit Completely.”

On November 15, 2021, about 0745 central standard time, a Beech A36TC airplane, N1805D, sustained substantial damage when it was involved in an accident near Rockport, Texas. The pilot sustained minor injuries. The airplane was operated as a Title 14 Code of Federal Regulations Part 91 personal flight.

The pilot reported that before departure, the airplane contained 70 total gallons of fuel: 20 gallons in each wing tip tank, and 15 gallons in each main tank, and the cross-country flight was estimated to be 45 minutes to Aransas County Airport (RKP), Rockport, Texas. Shortly after departure, the pilot switched the fuel selector from a main tank to the left tip tank.

About 20 minutes into the flight, the pilot noticed fuel being “sucked out of both the left and right main [tank] gas caps.” At that time, the pilot was about halfway to RKP, and he decided to continue since the weather was favorable. About 30 miles from RKP, the pilot switched to the left main fuel tank to prepare for a visual approach landing. At 1,200 ft and about 4 miles from the runway, the engine “sputtered a couple of times and quit completely.” The pilot switched to the right main fuel tank, which indicated ½ fuel, and attempted an engine restart. The restart was unsuccessful, and the pilot switched back to the left main fuel tank, which also indicated ½ fuel. The airplane was not going to make it to the runway;, the pilot ditched the airplane into Copano Bay, 1.5 miles short of RKP. The airplane impacted the water and came to rest upright.

The airplane sustained substantial damage to the fuselage, both wings and ailerons. The airplane was recovered from the water for further examination. 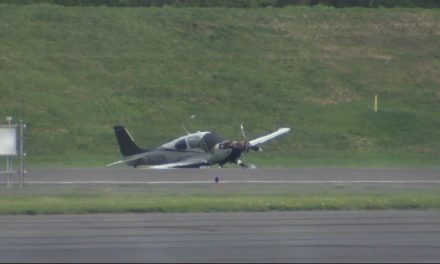