During The Climb, The Engine Speed “Suddenly Dipped Down” To About 1,300 RPM

On May 13, 2021, at 1117 central daylight time, a Beech B24R airplane, N9199S, was substantially damaged when it was involved in an accident near New Lenox, Illinois. The pilot and 2 passengers were seriously injured, and 1 passenger sustained minor injuries. The airplane was operated as a Title 14 Code of Federal Regulations Part 91 personal flight.

Automatic Dependent Surveillance – Broadcast data revealed the airplane departed from runway 2 at Lewis University Airport (LOT) at 1111. After takeoff, the pilot proceeded on a southeast course. The final data point was recorded at 1117.

The pilot stated that the pre-flight inspection was unremarkable, and the engine started without hesitation. The before takeoff run-up was “smooth” with no issues noted. The takeoff and initial climb out were normal. During the climb, the engine speed “suddenly dipped down” to about 1,300 rpm without any warning. His efforts to restore full power were not successful and he executed a forced landing to an interstate highway. The landing gear was extended once a landing was assured. However, on short final, he slowed the airplane to avoid a semitruck on the highway resulting in a hard landing and landing gear collapse.

The airplane landed on the southbound traffic lanes of I-355 about 1/2 mile north of the Route 6/Maple Road overpass and came to rest adjacent to the center median barrier wall. The left wing was damaged consistent with contact to the wall, and the engine and firewall were dislocated consistent with impact forces during the landing. 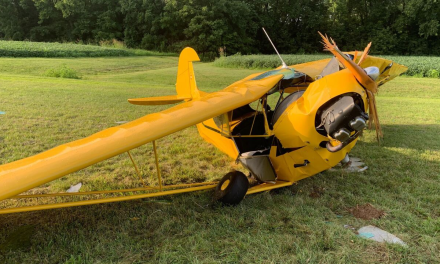