On November 6, 2022, about 2145 central standard time, a Beech E-90, N809DM, was destroyed when it was involved in an accident at Slidell Airport (ASD), Slidell, Louisiana. The commercial pilot sustained serious injuries. The airplane was operated as a Title 14 Code of Federal Regulations Part 91 positioning flight.

According to air traffic control information, the airplane departed John C. Tune Airport (JWN), Nashville, Tennessee, and climbed to a cruise altitude of 22,000 ft mean sea level. The pilot subsequently descended toward his home airport at ASD and attempted a visual approach that was discontinued due to ground fog.

The pilot received an instrument flight rules clearance and flew the RNAV (GPS) RWY 36 approach that was also discontinued due to ground fog. After executing a missed approach, the pilot flew another RNAV (GPS) RWY 36 approach, during which the airplane impacted wooded terrain about 800 ft right of the Runway 36 departure end. A post-impact fire consumed most of the airplane. The pilot egressed the airplane without assistance with serious burn injuries. 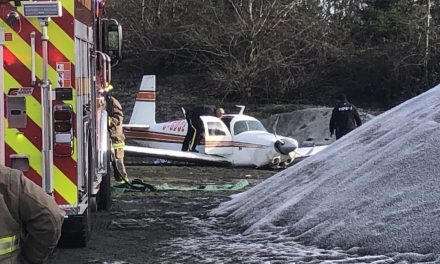