On January 29, 2022, about 1503 Pacific daylight time, a Beechcraft K35 Bonanza, N9530R, sustained substantial damage when it was involved in an accident in, Salem, OR. The private pilot and the passenger sustained fatal injuries. The airplane was operated as a Title 14 Code of Federal Regulations Part 91 personal flight.

According to preliminary air traffic control (ATC) data, the airplane departed McNary Field Airport (SLE), Salem, Oregon, for a day visual flight rules (VFR) departure. The pilot requested to stay in the traffic pattern, and the tower controller informed the pilot to remain in left closed traffic and cleared the pilot for takeoff from runway 34. The pilot took off, remained in the traffic pattern, and was cleared to land runway 34. Witnesses stated that during the approach to land, the airplane crossed the runway threshold and continued to descend. Before touching down on the runway, the airplane suddenly veered to the left and simultaneously entered a near vertical climb. The airplane rolled to the left, and subsequently entered a near vertical descent. The airplane impacted the ground, in a near vertical pitch attitude.

The engine compartment and the instrument panel remained attached to the airplane by the lower fuselage skin just aft of the firewall, and by avionics wires and flight control cables. The left side of the empennage revealed impact compression signatures emanating from top to bottom, just aft of the rear window. Both wings sustained substantial damage from wingtip to wing root.

The airplane has been recovered to a wreckage facility for further examination. 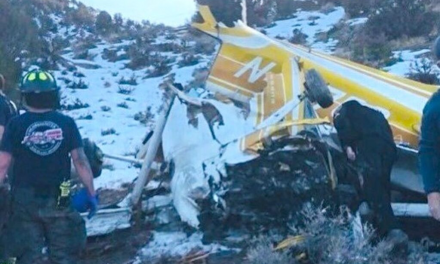