On June 22, 2022, about 1645 eastern daylight time, a Bell UH-1B helicopter, N98F, was destroyed when it was involved in an accident in Amherstdale, West Virginia. The private pilot, two pilot rated passengers and three additional passengers were fatally injured. The helicopter was operated by MARPAT Aviation, LLC, as a Title 14 Code of Federal  Regulations Part 91 flight.

The flight was associated with the “7th Annual Huey Reunion” during which the operator gave passengers the opportunity to “fly” the former military helicopter with a “safety pilot” seated in the left front seat for a “required donation” or “ride” for a suggested donation. The accident flight was the last flight of the day, and the accident occurred about 15 minutes after departure from Logan County Airport (6L4), Logan, West Virginia. There were no known witnesses to the accident.

The helicopter impacted a rock face about 3.5 nautical miles east of 6L4 and came to rest partially inverted on its right side on an asphalt road. The wreckage spanned the 26-ft road and continued into a ditch at the base of a rock face. The main wreckage was 542 ft past a utility cable that crossed about 180 ft above the road. Two utility cables were fractured consistent with tensile overload and were displaced toward the main wreckage near the roadside at 220 ft and 397 ft from the remaining utility cable. All major components of the helicopter were located in the vicinity of the accident site.

Examination of the wreckage revealed that the cockpit and cabin had impacted the road and a guardrail, and both were consumed by a postimpact fire. The empennage, composed of the tail boom, vertical fin, and horizontal stabilizer, remained attached to the aft fuselage. The right horizontal stabilizer was impact-deformed at its tip and the left horizontal stabilizer was intact. The vertical stabilizer and tail boom were wrinkled. The right landing skid was located adjacent to the aft fuselage; however, first responders stated that it was moved to facilitate rescue efforts. The left landing skid was located in the ditch. Additional wreckage including pieces of Plexiglas, the aft cap of the left skid, a section of a tail rotor blade and a rock with green paint transfer were observed about 40 ft above the wreckage on a ledge of the steep rock face.

Both main rotor blades remained attached to their respective grips and drag braces, which remained attached to the hub. The hub remained attached to the main rotor mast. The main gearbox was present in its normally installed area separated from the airframe. The input driveshaft was separated from both the main gearbox and the engine and was observed under the main gearbox. The leading edge spar of the white main rotor blade was continuous through the blade span with sections of afterbody that had separated from the blade located adjacent to it in the main wreckage. The leading edge spar of the red main rotor blade was continuous to the tip with a chordwise upward bend near the inboard side of the blade. The outboard half of the red main rotor blade exhibited leading edge deformation in the direction opposite of normal rotation and the afterbody in this section was fragmented into multiple pieces that were observed near the main wreckage. The main rotor controls were impact separated in multiple locations from the pitch change links to the swashplate and collective lever control tubes. The main rotor controls forward of the swashplate and collective lever control tubes were consumed by the postimpact fire. 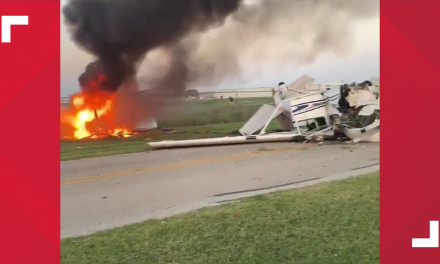