Witness: The Tail Rotor Separated From The Helicopter

On April 24, 2020, about 1600 mountain standard time, a Bell UH-1H helicopter, N3276T, was substantially damaged when it was involved in an accident in Mesa, Arizona. The pilot was fatally injured, and the passenger was seriously injured. The helicopter was operated as a Title 14 Code of Federal Regulations (CFR) Part 91 relocation flight.

Witnesses reported they observed the helicopter flying low towards Falcon Field Airport (FFZ), Mesa, Arizona, with white smoke coming from the rear rotor area. Suddenly, the tail rotor separated from the helicopter and landed in a dirt lot below. The helicopter continued northeast as it started to spin and impact the ground.

On scene examination by a Federal Aviation Administration Inspector indicated that the debris field was about 1/2 mile, extending along a generally northeast direction. The first identified piece of debris were fragments of glass, which were consistent with a navigation light on the vertical stabilizer. About 200 yards further northeast was the tail rotor assembly, and the input pinion gear assembly. The rest of the helicopter came to rest about ½ mile further northeast in an open, slightly sloped field. The first pieces of debris in the field were the vertical stabilizer and a portion of the horizontal stabilizer followed by two long and narrow ground strikes consistent with main rotor blade strikes. Immediately following this area was the main wreckage; the helicopter came to rest slightly nose, and left side low, along a heading of about 49 degrees. The helicopter exhibited upward crushing throughout the cabin and fuselage, most extensively on the left side of the fuselage. The mast and the main transmission were displaced forward, and the main rotor assembly was fracture separated. The main rotor blade assembly was the last major piece of debris located about 20 yards northeast of the main wreckage.

The helicopter has been recovered to a secure location for further examination. 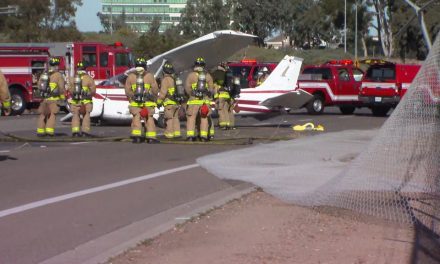 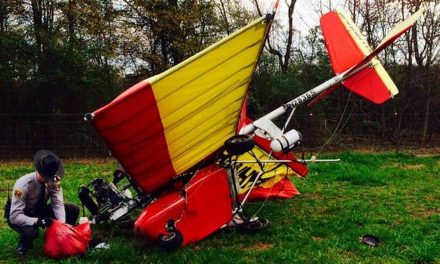