On February 17, 2021, about 945 eastern standard time, a Cessna 150G, N8428J, was substantially damaged when it was involved in an accident near Maryland Airport (2W5), Indian Head, Maryland. The flight instructor and pilot-rated student were uninjured. The airplane was operated as a Title 14 Code of Federal Regulations Part 91 instructional flight.

According to the pilot-rated student, he kept his airplane tied down on the ramp at the Potomac Airfield (VKX), Friendly, Maryland. On the day of the accident, he was flying with his flight instructor to prepare for his initial flight instructor checkride. He added 10 gallons of fuel to the fuel tanks, conducted a preflight inspection, and rocked the wings to free any water that might have been trapped in the fuel tank before draining the fuel tank sumps. He noted no water from the wing sump fuel samples; however, there was water in the fuel drained from the fuel strainer drain. He also noted that the right wing sump did not “flow as freely” as the left wing sump.

About 90 minutes into the lesson while performing a left chandelle maneuver, the engine “hiccuped” momentarily. The instructor and pilot-rated student climbed to 4,000 ft msl and proceeded about 10 miles to 2W5 for a precautionary landing. The pilot-rated student reported that upon arrival over 2W5, he descended in a circle over the airport.

Upon arriving abeam the runway numbers on a right downwind leg to runway 20, the airplane was still several hundred feet above pattern altitude. He stated that the instructor took control of the airplane and initiated a side slip to lose altitude, keeping the throttle set to 1,400 rpm to ensure that the engine did not lose power. The instructor stated that flaps were not extended during the side slip because the airplane’s airspeed was “above the white arc.” When the airplane reached the midpoint of the 3,740-ft runway at an indicated airspeed of 100 knots, the instructor executed a go-around maneuver. During the maneuver, after the airplane climbed about 300-400 feet, the engine stopped producing power and the propeller windmilled momentarily before stopping. With inadequate time to perform remedial actions, the instructor executed a forced landing into the trees. The empennage and both wings sustained substantial damage. 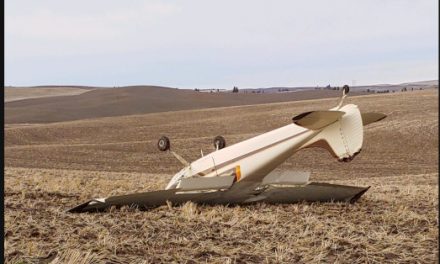