On July 11, 2021, about 0915 mountain daylight time, a Cessna 172F, N5340R sustained substantial damage when it was involved in an accident near Eagle Butte, South Dakota. The pilot was uninjured.

The airplane was being operated as a Title 14 Code of Federal Regulations Part 91 personal flight. The pilot reported that, when he was about 6 miles from the Cheyenne Eagle Butte Airport (84D), he noticed the engine’s oil temperature was high followed by a “clattering noise.” He reduced the engine power by about 100 rpm and diverted to 84D. About 2 miles from the airport, the engine lost all power.

Unable to reach the runway, he elected to execute a forced landing to a wheat field. During touchdown, the nose wheel impacted rising terrain, which caused the airplane to bounce. When it touched back down, the nose gear separated and the airplane flipped over, coming to rest inverted. The airplane sustained substantial damage to the left lift strut and fuselage.

A post-accident examination revealed a large hole in the forward section of the engine case.

A detailed engine examination is pending. 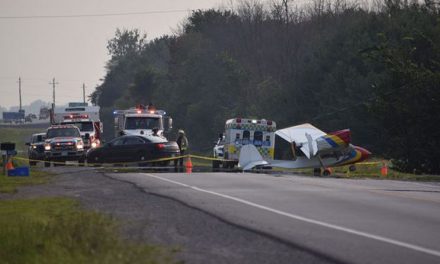