May Have Been A Slight Tailwind On Takeoff, But It Was Not Strong Enough To Move The Windsock

On April 7, 2021, about 1408 eastern daylight time, a Cessna 177B airplane, N24RG, was destroyed when it was involved in an accident near Great Valley, New York. The pilot was seriously injured, and the pilot-rated passenger was fatally injured. The airplane was operated as a Title 14 Code of Federal Regulations Part 91 personal flight.

The pilot, who owned the airplane, held a private pilot certificate with a rating for airplane single-engine land. Earlier that day, the pilot and his passenger had flown from the Ledgedale Airport (7G0), Brockport, New York, to Great Valley Airport (N56), Great Valley, New York, and met with another pilot for lunch. After lunch, the other pilot departed runway 24 without incident. He stated that there may have been a slight tailwind on takeoff, but it was not strong enough to move the windsock. Another pilot based at the airport described the weather as “an absolute perfect day to fly.”

A witness was outside across the street from the runway and saw the first airplane depart. He then heard the accident airplane’s engine “rev” up and begin its takeoff roll. When the witness made eye contact with the airplane it was in a 90-degree bank. He told a co-worker that he was concerned about the airplane, so he got in his truck and drove to the airport. When he arrived, he saw that the airplane had crashed and was engulfed in flames.

Another witness, who lives adjacent to the runway, had a full view of the runway from her living room and saw the accident airplane taking off. She said the airplane bounced a couple times before it became airborne. The airplane climbed to about 20 ft above the ground when it made a hard left bank, and she could see the tops of both wings. The witness said the left wing impacted the ground and it “crumbled” and then the airplane “collapsed.” She said that she watches airplanes takeoff and land all the time, and by the time they come by her home, they typically are already airborne. She said that she did not see or hear anything unusual with the airplane or engine prior to the accident, except that it was “low” and “late” taking off. As the witness was on the phone with 911, she observed black smoke coming from the wreckage.

The airplane departed runway 24 (an approximate 3,800-foot-long by 90-foot-wide turf runway). Ground scars at the accident site and damage to the airplane were consistent with the airplane impacting terrain in a left-wing-low, nose-down flight attitude. The airplane came to rest about 2,250 ft down and about 50 ft left of the approach end of the runway. The left and right wings came to rest upright. The engine, fuselage, and tail were inverted. A postimpact fire consumed the fuselage, inboard left wing, left flap, and the outboard half of the left stabilator. The right wing also sustained fire damage.

All major components of the airplane were located at the accident site. Flight control continuity was established for all flight controls to the cockpit area. The only break in the flight controls was observed to the right aileron control cable. The fractured ends of the cable were frayed, consistent with overload. Examination of the flap jackscrew revealed the flaps were fully retracted at the time of impact.

The top and bottom spark plugs were removed and all, but the No. 2 and No. 4 top plugs appeared gray in color consistent with normal wear per the Champion Check-A-Plug chart.

The No. 2 and No. 4 top plugs were oil soaked due to the position of the engine after impact. The dual magneto was removed and when rotated, spark was observed at each ignition lead. The carburetor remained attached to the engine, but the main inlet fuel line was broken due to impact. The carburetor was disassembled, and a small amount of yellowish colored fluid was observed in the bowl. Water finding paste confirmed the fluid was water. Based on the position of the engine and carburetor along with the impact broken inlet fuel fitting, water most likely entered the carburetor during postaccident fire suppression efforts.

The oil pan was intact, and the oil suction screen was absent of debris. The oil filter was removed, and the element was also absent of debris. Examination of the airframe and engine revealed no evidence of preaccident mechanical
malfunctions or anomalies that would have precluded normal operation. 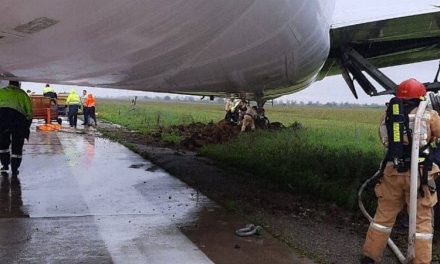 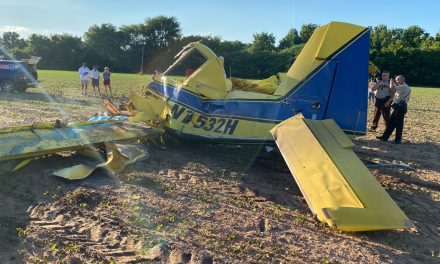