On March 02, 2022, about 0800 Pacific standard time, a Cessna 182D, N8814X, sustained substantial damage when it was involved in an accident near Mortmar, California. The commercial pilot sustained minor injuries. The airplane was operated as a Title 14 Code of Federal Regulations Part 91 personal flight.

The pilot reported that shortly after departure from Jacqueline Cochran Regional Airport, the airplane climbed to 400 ft above ground level and leveled off. Shortly after level off, a noticeable decrease in engine rpm was observed by the pilot, followed by a total loss of power. He attempted to troubleshoot the loss of engine power by cycling the mixture, increasing, and decreasing the propeller speed, and he engaged the starter to no avail. He recalled that he did not manipulate the fuel selector to switch from the right fuel tank to the left, because the airplane’s altitude decreased rapidly. The airplane touched down on a soft dirt crop field and nosed over. The airplane came to rest about 12.5 miles southwest of the departure airport.

An oil change was identified by the pilot as the only recent maintenance that he could recall, and the airplane had flown several times since the oil change.

The airplane has been transported to a storage facility pending further investigation. 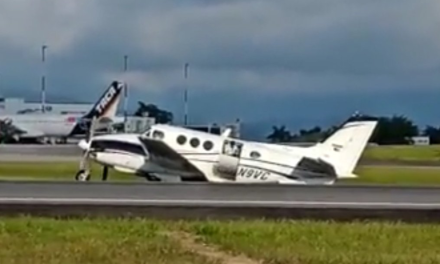