On September 18, 2021, about 0800, a Cessna 404, N5409G, was substantially damaged when it was involved in an accident near Sheridan, Wyoming. The pilot was not injured. The airplane was operated as a Title 14 Code of Federal Regulations part 135 scheduled cargo flight.

The pilot stated that the flight and landing approach were uneventful. He recalled configuring the airplane for landing by extending the landing gear and flaps, and then began the landing flare. His next recollection was of being in the airplane at the right side of the runway surrounded by a cloud of dust. He did not have any recollection of how the airplane got there.

Examination of the airplane revealed that it had departed runway 15 shortly after landing. The landing gear had collapsed, the nose structure was deformed, and the runway surface exhibited a set of gouges that matched the dimensions of the right wheel rim, and two sets of slash marks consistent with propeller strike. 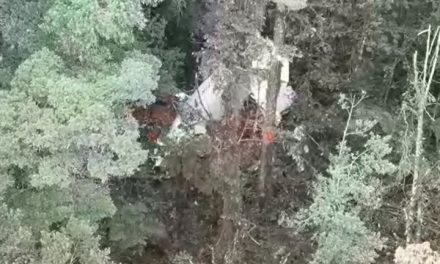