Debris Was Consistent With A Nearly Wings Level, Nose Down, High Speed Impact

On November 21, 2021, about 1920 mountain standard time, a Cessna T310R, N310JA, was destroyed when it was involved in an accident near Chadron, Nebraska. The private pilot and 2 passengers sustained fatal injuries. The personal flight was conducted under the provisions of Title 14 Code of Federal Regulations Part 91.

The airplane landed at the Chadron Municipal Airport (CDR), dropped off a passenger, and refueled. About 40 minutes later, the airplane departed from runway 30 at CDR in dark night, visual meteorological conditions. Airport security video showed that the airplane’s takeoff roll and liftoff were normal. Automated Dependent Surveillance – Broadcast (ADS-B) data showed the airplane climbed to about 200 ft, turned to the right, and descended into rising terrain.

The initial ground impact was about 3,347 ft MSL, on an approximate heading of 350°. The wreckage debris was dispersed over 600 ft from the initial ground impact point. A post-crash fire consumed most of the airplane. The distribution of the debris was consistent with a nearly wings level, nose down, high speed impact. Ground scars from the propeller blades of both engines were present and consistent with rotation at the time of impact.

Although most of the airplane wreckage was consumed by fire, examinations of the existing flight controls did not reveal any pre-impact anomalies. Both engines were examined and neither revealed any pre-impact anomalies. Fuel was present in each engine’s fuel distribution system. Testing of the fuel source at CDR revealed that the fuel was normal and had no contaminants. The damage to the propeller blade assemblies from both left and right engines were symmetrical, consistent with the engines producing similar power at the time of impact. 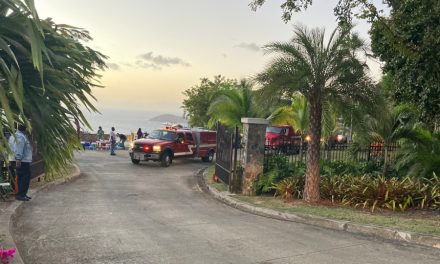