On June 15, 2021, about 1045 Pacific daylight time, a Cirrus Design Corp. SR20 airplane, N98423, was substantially damaged when it was involved in an accident at the Truckee-Tahoe Airport (TRK), Truckee, California. The flight instructor was fatally injured, and the student pilot sustained serious injuries. The airplane was operated as a Title 14 Code of Federal Regulations Part 91 instructional flight.

Review of recorded communication from the air traffic control tower revealed that controllers issued taxi instructions to the pilots to taxi to runway 20. The pilots transmitted that they were ready for takeoff from runway 20 and requested closed traffic. The controller subsequently reported the wind conditions and instructed the pilots to make right closed traffic prior to issuing a clearance for takeoff. No further radio communication with the pilots were received.

A pilot rated witness reported that, while standing on the airport ramp of TRK, he observed the accident airplane depart from runway 20. The airplane appeared to make a shallow right turn, consistent with a right crosswind and downwind turns. About the time the witness expected the wings to level, the airplane abruptly banked 90° to the right and pitched down in a nose low attitude. The witness said that simultaneously a parachute was deployed from the airplane and it descended below the tree line out of visual sight. That was followed by the sound of impact with terrain. The witness added that at the time of departure, they observed an airport sign that indicated a density altitude of 7,100 ft.

Recorded Automatic Dependent Surveillance-Broadcast (ADS-B) data provided by the Federal Aviation Administration (FAA) showed that the airplane departed from runway 20 at 1742:49 ascended to 6250 ft mean sea level (msl) and start a right southwesterly turn. The data showed that the airplane completed the turn at 1744:05, on a southwesterly heading, at an altitude of 6,325 ft msl. At 1744:14, the data showed a right turn to a northerly heading at an altitude of 6,300 ft msl, followed by a descent. The airplane remained on a northerly heading and continued to descend until ADS-B contact was lost at 17:44:21, at an altitude of 6050 ft, about 116 ft south of the accident site.

Examination of the accident site by the National Transportation Safety Board investigator-in-charge revealed that the airplane impacted terrain about 1 mile south west of the departure end of runway 20. The airplane came to rest upright in an approximate 15° nose low attitude, on a heading of about 335° magnetic, at an elevation of 5,905 ft mean sea level. No visible ground scars were observed surrounding the wreckage. The parachute rocket motor was located about 450 ft southeast of the wreckage and the parachute cover was located about 250 ft south of the wreckage. The fuselage and wings were mostly intact, however, the forward portion of the fuselage exhibited impact damage. The wreckage was recovered to a secure location for further examination. 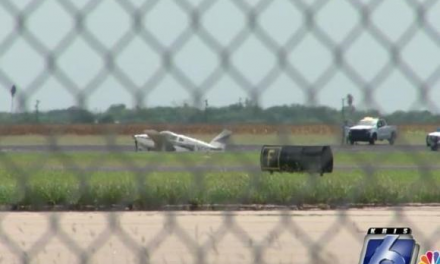 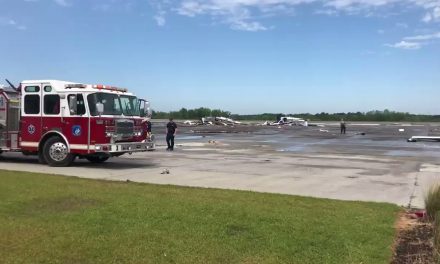 At least 20 planes destroyed at Walterboro airport after possible tornado