A Radio Transmission About A Trim Problem, Thought To Be From The Accident Pilot Was Heard On Frequency

On November 5, 2022, about 1200 Pacific daylight time, a Cirrus SR20, N700YZ, was substantially damaged when it was involved in an accident near San Diego, California. The student pilot was fatally injured. The airplane was operated as a Title 14 Code of Federal Regulations Part 91 instructional flight.

Review of recorded communication from the Montgomery-Gibbs Executive (MYF) air traffic control tower revealed that N700YZ had been cleared for a base leg inbound to RWY 28R. Shortly after, a second airplane, N480SP, was cleared for takeoff on RWY 28R, and a third airplane, N5396E, was instructed to Line-Up and Wait (LUAW) on RWY 28R. About 30 seconds later, N5396E was cleared for takeoff. About 14 seconds later, the controller instructed N700YZ, who was on about a one mile final to RWY 28R, to sidestep to the left and go-around. There was no response from the pilot, and the controller repeated the instruction to go-around, without a response.

During this timeframe, a radio transmission about a trim problem, thought to be from the accident pilot was heard on frequency. The controller responded that, the aircraft that radioed about the trim problems, had a stuck mic on the tower frequency. Recorded Automatic Dependent Surveillance-Broadcast (ADS-B) data provided by the Federal Aviation Administration (FAA) showed the accident airplane conducting traffic pattern work to both runways 28L and 28R at MYF. The pilot flew 2 turns in the pattern to RWY 28L (left traffic), followed by 2 turns in the pattern to RWY 28R, the second of which was the accident leg, as seen in figure 1. The data showed that at 1155:58, the airplane continued to ascend in a right turn until ADS-B contact was lost, about 350 ft southeast of the accident site.

Examination of the accident site revealed that the airplane impacted flat open terrain about 730 ft northwest of the departure end of runway 28R. The airplane came to rest upright on a heading of about 10° magnetic, at an altitude of 417 ft mean sea level. The first identified point of contact (FIPC) with terrain was a ground scar/impression on a heading of 195° magnetic and about 125 ft south from the main wreckage. The ground scar/impression was about 11 ft long, 12 inches wide and 2 in deep. The debris field was about 125 ft in length and 75 ft wide.

Numerous pieces of composite wing, plexiglass, and propeller were observed throughout the debris path. The wreckage was recovered to a secure location for further examination. 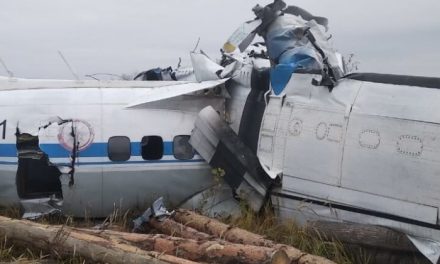