On September 8, 2022, about, 1626 Pacific daylight time, a Czech Sport Aircraft, Piper Sport, N126WK, was destroyed when it was involved in an accident in Santa Monica, California. The flight instructor and student pilot were fatally injured. The airplane was operated as a Title 14 Code of Federal Regulations CFR Part 91 instructional flight.

The flight was an introductory flight lesson for the prospective student pilot, with a flight school was based at Santa Monica Municipal Airport (SMO). Prior to departure, the instructor provided about 45 minutes of basic ground instruction. Preliminary ADS-B data indicated that the airplane departed from runway 21 at 1551, flew runway heading and turned right after reaching the Pacific shoreline a few minutes later. The airplane continued to fly north along the coast, at altitudes varying between 600 and 2,775 ft mean sea level. After reaching Malibu, the airplane turned inland around the Pointe Dume Peninsula, and then back east along the coast toward Santa Monica. At 1622, the airplane had joined the right downwind leg for runway 21 at the traffic pattern altitude of 1,200 ft. By the time the airplane had reached the base leg, it had climbed to an altitude of 1,375 ft, and as it made the base leg turn it began to descend, reaching 600 ft once it was established on final about 1.25 miles from the runway threshold.

Multiple witnesses observed the airplane land on runway 21, with one describing the landing as hard. The witnesses stated that the airplane then began to aggressively pitch up and climb, while the engine made a sound consistent with it going to full power. All the witnesses provided similar accounts of the airplane continuing to climb in a nose up attitude, before leveling off at the apex of the climb, then spinning to the left, descending, and colliding with the ground.

A security video camera located on the southeast side of the airport, adjacent to the runway 21 threshold, and facing north, captured the final landing approach segment. The video showed the airplane descending over the runway threshold markings at an altitude of about 25 ft above ground level (agl) and then passing to the left and out of the cameras field of view. A second camera, similarly positioned, but facing northwest captured the other end of the runway threshold markings. As the airplane came into view, the main landing gear was already on the ground, and the airplane then began to climb in a slightly nose-up attitude. Over the next three seconds, the airplane pitched up to an almost vertical attitude and climbed out of the cameras field of view. The shadow of the airplane on the runway surface indicated that it continued to climb for another two seconds, before descending and striking the ground about 5 seconds later.

The airplane struck the ground in a nose-down attitude and came to rest at the intersection of taxiway B and B4, about 375 ft south of the runway 21 threshold. The cabin, inboard wings and entire tail section were consumed by fire, with only ash remnants of the aft cabin and tail structure remaining. 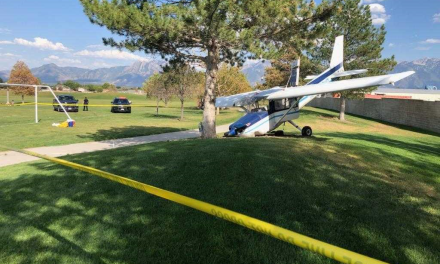