On May 24, 2021, about 1417 Pacific daylight time, an experimental Dassault Aviation Mirage F-1 Turbo-jet, N567EM, was destroyed when it was involved in an accident near Nellis Air Force Base, (LSV), Las Vegas, Nevada. The pilot was fatally injured. The airplane was operated as a public-use aircraft in support of the United States Air Force’s simulated combat training.

According to the pilot of the number 2 airplane in the formation, the accident airplane was the lead of a flight of two aggressors, which returned to LSV after completion of their Weapons School support flights in the Nevada Test and Tactics Range. The number 2 airplane in the formation recovered before the lead airplane since it reached its briefed fuel status first. About 15 minutes later, the lead airplane recovered single ship. While en route to LSV and about several minutes out, the lead pilot reported that the airplane was “code 1,” signifying that the airplane had no maintenance discrepancies.

The lead airplane entered the traffic pattern and reported initial for runway 03R. Shortly after the break, and approaching the final turn, the pilot reported that he would be accomplishing a low approach and then proceeding to Flex (LSV 338/04). The pilot started the final turn and then reported that he had a flap issue and when asked if he was declaring an emergency, he responded “affirm.” Shortly thereafter, while still in the final turn, the airplane descended, and the pilot ejected. Subsequently, the airplane stuck terrain in a residential area about 1 1/2 miles south of the approach end of the runway. The wreckage was consumed by a post-crash fire. 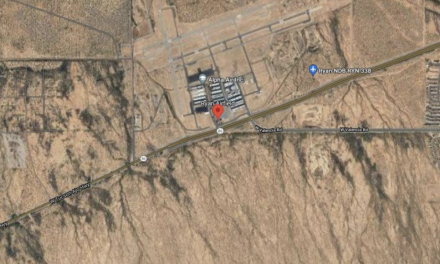 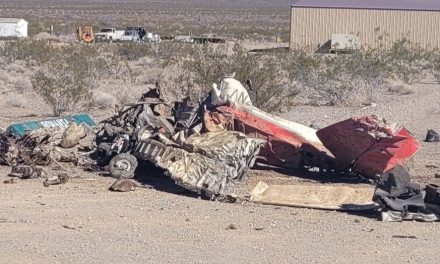