On May 6, 2021, about 1100 eastern daylight time, a Dà-Jiang Innovations (DJI) Matrice 300 RTK small unmanned aircraft system (sUAS, commonly known as a drone), registration FA3HW43WTF, was involved in an accident near Young Harris, Georgia. The remote pilot in command (RPIC) sustained serious injuries. The flight was operated as a Title 14 Code of Federal Regulations Part 107 demonstration flight.

The purpose of the flight was to demonstrate the drone capabilities for a potential customer with a payload that consisted of a Zenmuse H20T camera and a Wingsland Z15 spotlight. The flight location was very close to a DJI GEO Zone designated as a “Restricted Zone.” According to DJI, in Restricted Zones, which appear red the DJI GO application, users will be prompted with a warning and flight is prevented. GEO Zones that prohibit flight are implemented around locations such as airports, power plants, and prisons.

After the accident, the RPIC stated that he was initially unaware of the Restricted Zone and never saw a notification on the remote controller during the flight. He added that he only discovered the Restricted Zone after a discussion with the NTSB. The RPIC stated that he performed a normal takeoff and flew the drone to the west over a wooded area about 393 ft above ground level (agl). He stated that during the spotlight demonstration the drone was unresponsive to control inputs, so he utilized the return-to-home (RTH) function. During the RTH descent toward the home point the drone hovered about 7 ft agl over a vehicle in the parking lot and was still unresponsive to any control inputs. When the drone would not land, the RPIC grabbed onto the landing gear and attempted to physically move the drone away from the vehicle. The drone resisted the physical displacement and maintained its position over  the vehicle. The RPIC requested assistance from a demonstration attendee and handed him the remote controller. With guidance from the RPIC, he attempted several times to shut down the motors while RPIC held onto the landing gear with both hands. Finally, the RPIC attempted to remove the drone batteries when a propeller blade struck his right hand several times, which caused tendon and nerve damage.

After the injury was sustained, the RPIC continued to hold onto the drone for several minutes until the batteries were exhausted and the motors stopped.

The accident flight logs and data were retrieved from the drone and will be analyzed. A preliminary review of the flight logs showed that the RTH function was initiated about 7 minutes into the flight at 393 ft agl. A Restricted Zone notification was issued two times on the remote controller during the RTH procedure. 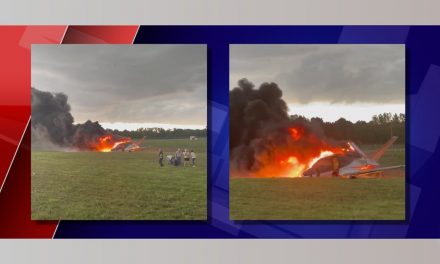 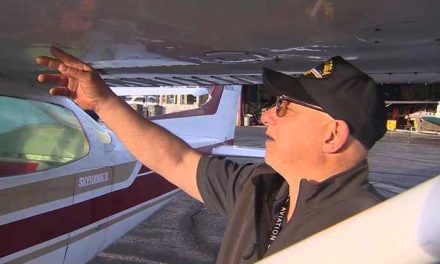