On September 6, 2020, about 1000 Alaska daylight time, a Eurocopter AS350 B3, N354PA, was substantially damaged when it was involved in an accident near Fort Greely, Alaska. The pilot and one crew member were not injured. The helicopter was operated as a Title 14 Code of Federal Regulations Part 91 flight.

The pilot reported that while in cruise flight, at about 700 ft agl and 110 kts, a sudden loud bang and associated left yaw was experienced as the left passenger door departed the helicopter. According to the pilot, the left passenger door, which was closed, went from “fully secured to gone instantly.” The passenger door subsequently impacted a main rotor blade during the separation sequence, which resulted in substantial damage. Subsequently an
emergency landing was made to a nearby grass area with no further incident. The pilot added that the left passenger sliding door had not been used other than to check it for security during the preflight, and it was checked by both himself and the mechanic before flight.

The helicopter and passenger door have been recovered and a detailed examination is pending. 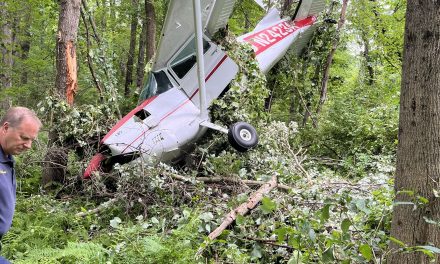