Helicopter Was “In A Nose Down Attitude… Far Less Than 1,000 Ft Above The Ground…”

On January 11, 2022, about 1255 eastern standard time, a Eurocopter EC-135 P2+, N531LN, was substantially damaged when it was involved in an accident in Drexel Hill, Pennsylvania. The airline transport pilot was seriously injured. The two medical crewmembers and the patient were not injured. The helicopter was operated by Air Methods Corporation as a Title14 Code of Federal Regulations Part 135 air ambulance flight.

Preliminary Automatic Dependent Surveillance – Broadcast (ADS-B) data revealed that the helicopter departed Chambersburg Hospital Heliport (PA60) about 1205 and was destined for Children’s Hospital of Philadelphia Heliport (9PN2), Philadelphia, Pennsylvania. The track showed the helicopter in a cruise profile on an easterly track about 3,500 ft mean sea level (msl). About 1243, the helicopter descended and then leveled about 2,800 ft msl, then subsequently descended and leveled at 1,500 ft msl, tracking directly toward 9PN2. At 1253:11, the helicopter track depicted a series of heading and altitude excursions. The plots depicted altitudes between 1,700 ft msl and 1,250 ft msl before the target disappeared at 12:53:17.

In a written statement, a witness whose home was directly beneath the helicopter’s flight path said that he was an aviation enthusiast and was familiar with the many helicopters flying to and from area hospitals. He said that his attention was drawn to the accident helicopter because it was “very low and louder than normal” and that the “tone” of the rotors was unfamiliar. According to the witness, the helicopter was “in a nose down attitude… far less than 1,000 ft above the ground… [and] rotating around its longitudinal axis.”

A second witness nearby said that he saw a helicopter “very low…very loud…banked right and left out of control, then appeared to straighten…” before it disappeared from view.

Brief video clips from open-source media outlets showed the helicopter upright, in a steep descent, exhibiting small but rapid changes in each axis (pitch, roll, yaw). A home doorbell camera captured the last second of flight as the helicopter appeared level in the frame, in a slight nose-up attitude, as it impacted the ground, separating the tailboom, then disappeared from view.

The pilot made himself available for interview, but the interview was postponed due to his medical condition.

The flight nurse and flight medic were interviewed by a Federal Aviation Administration (FAA) aviation safety inspector. According to the flight medic, the flight was routine, and they were within 10 minutes of landing at 9PN2. He and the flight nurse were out of their seats treating the patient when a loud “bang” was heard, and the helicopter banked sharply right and continued into a right roll. The medic said that the helicopter rolled inverted, perhaps multiple times, and that he and the nurse were “pinned to the ceiling” and internal communication was lost. The helicopter was leveled, the patient was secured, the crewmembers secured themselves in their seats, and they braced for landing.

The pilot held an airline transport pilot certificate with ratings for airplane multiengine land and rotorcraft-helicopter, with private pilot privileges for airplane single engine. The pilot’s most recent second-class FAA medical certificate was issued on August 26, 2021.

The operator reported that the pilot had accrued 4,123 total hours of flight experience of which 3,400 hours were in helicopters and 185 hours were in the accident helicopter make and model.

The helicopter was examined at the accident site and all major components were accounted for at the scene. The was a strong odor of fuel and evidence of fuel spillage. The wreckage path was oriented about 150° magnetic and measured about 108 ft long. The initial impact point was in a tree about 40 ft tall, and pieces of freshly broken and cut wood were found beneath it.

The helicopter came to rest on its left side, nearly inverted, against a stone wall. The tailboom was separated at the fuselage and rested between the helicopter and the wall. The fenestron was intact inside its shroud. Fenestron drive and control continuity was confirmed through several breaks which appeared due to overload. The fenestron flexball cable was found wrapped around the main rotor mast. The landing gear was destroyed by impact and the windscreen and chin bubble on the copilot’s (left) side were destroyed; the airframe and cockpit and cabin floors displayed impact fractures, but the cockpit, instrument panel, and cabin area remained largely intact. The cockpit controls were connected and intact. While the yaw control pedals remained attached to their respective control tubes, the floor structure that contained each pedal assembly mount was fractured. The engines and main transmission were secure in their mounts, the main rotor hub was attached to the mast, and the root ends of all four main rotor blades were secure in the hub. Two main rotor blades were wrapped around the mast, one was straight with a chordwise fracture, and the fourth was separated from the hub during recovery. Later, all four blades were cut near their root to facilitate further examination.

The wreckage was recovered to an aircraft recovery facility in Clayton, Delaware, for further examination.

The engines and main transmission were secure in their mounts. Continuity was confirmed from the main rotor head, through the transmission, to the #1 and #2 high speed shafts. The functionality of the freewheeling unit was confirmed.

Cyclic and collective control continuity were confirmed from the controls to the main rotor system. The blue pitch-change link was fractured due to overload, and the yellow link was impact damaged. Data downloaded from each engine revealed nominal engine performance consistent with the mission profile across the duration of the flight. Components from the cockpit warning system, electrical and hydraulic components from the autopilot and flight control system, as well as fluid samples, were retained for further examination. 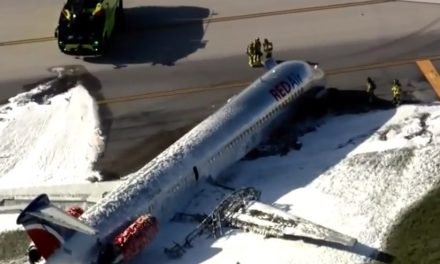