Pilot Reported That The Airplane Had Experienced Engine Issues

On November 8, 2021, about 1620 central standard time, an experimental, amateur-built Sonex airplane, N432SX, was substantially damaged when it was involved in an accident near Malone, Florida. The private pilot was fatally injured. The airplane was operated as a Title 14 Code of Federal Regulations Part 91 personal flight.

According to a friend of the pilot, on the day of the accident the pilot reported that the airplane had experienced engine issues, which included a total loss of engine power on two occasions during a flight earlier that day. The friend questioned the pilot to get more details, but the conversation was interrupted, and the pilot did not explain what actions he performed to restore engine power.

Another witness who spoke with the pilot before the accident flight reported that the pilot stated that he thought that he had found “the problem” and he was planning to remain in the airport traffic pattern at the Marianna Municipal Airport (MAI), Marianna, Florida. The witness reported the flight departed from runway 36 and continued straight-out after departure. He then diverted his attention and did not witness the accident.

A third witness, who was located about .65 nm south-southwest of the accident site reported that he was in the cab of a tractor plowing a field when he observed an airplane that he thought was a “crop duster” flying in a westerly direction at a high rate of speed towards the ground. He did not hear any sound associated with the airplane from inside the tractor cab. The airplane disappeared behind trees and about 1 to 2 seconds later, he saw a big ball of black smoke. Prior to the black smoke he did not notice any erratic movements, nor did he see anything trailing the airplane.

Examination of the accident site revealed the airplane impacted an oak tree about 25 ft above ground level. The airplane then impacted the ground west of the tree and came to rest inverted. A postcrash fire consumed the cockpit and extensively damaged the engine, which was retained for further examination. 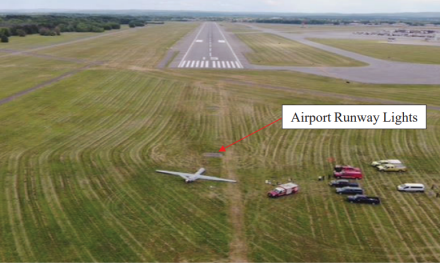 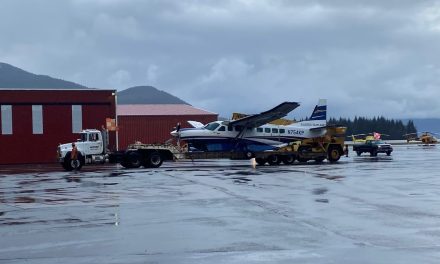 Juneau plane crashes with six onboard with no injuries