On September 22, 2021, about 1926 Alaska daylight time, a Piper PA-14 airplane, N4276H, was substantially damaged when it was involved in an accident near Chickaloon, Alaska. Of the two occupants onboard, the first pilot sustained minor injuries, and the second pilot was not injured. The airplane was operated as a Title 14 Code of Federal Regulations Part 91 personal flight.

The first pilot reported that before departure, a “thorough” preflight inspection was completed, and an engine run-up was done with no anomalies noted. He said that the takeoff was uneventful until, immediately after lifting off, the engine lost power, regained power momentarily, and then all engine power was lost. Insufficient runway remained to land. The airplane landed in an area of tree and brush covered terrain off the end of the runway and nosed over.

The airplane sustained substantial damage to the fuselage, wings, wing lift struts, and rudder. An NTSB postrecovery examination of the engine and airframe fuel system did not reveal any anomalies consistent with a loss of engine power. 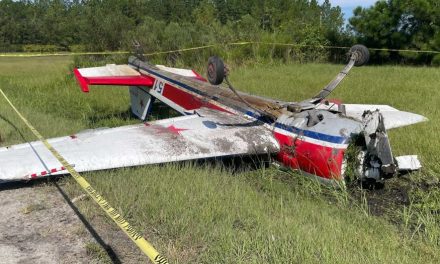