On September 22, 2022, about 1439 Pacific daylight time, a Piper PA-28-140, N7063R, was destroyed when it was involved in an accident near Sisters, Oregon. The pilot was fatally injured. The airplane was operated as a Title 14 Code of Federal Regulations Part 91 personal flight.

The pilot used an online flight planning tool for his enroute and destination performance planning. Data retrieved from the online tool showed that the pilot had planned to depart a private strip in Llano, California about 0700 and then fly a succession of waypoints and fuel stops while enroute to his final destination of Curtis, Washington (0WA2). The data did not include any flight tracking information such as global position system coordinates. His planned route of flight comprised the following waypoints (in the reported order): Rosamond, California (L00), Sanger, California (9CA7) followed by a stopover in Jackson, California (JAQ). Fuel records from the JAQ airport showed that the pilot purchased 25 gallons of 100 low lead aviation grade gasoline at 0953. The pilot’s subsequent waypoints included Nevada County, California (GOO) followed by Sisters, Oregon (6K5) where the pilot purchased another 29 gallons of fuel at 1400. According to an airport surveillance video, the pilot departed 6K5 about 1410.

He had planned to fly through Scappoose, Oregon prior to landing at his final destination. A witness located about 0.50 nm north of the accident site heard the airplane during its final moments. The witness reported that between 1430 and 1445 she heard a small airplane that was flying close to her that caught her attention. She heard a “thud” sound approximately 30 seconds later at which point she began to look for the airplane. The witness stated that the engine sounded smooth and continuous prior to impact. Another witness, who was located about 1,000 ft from the accident site, stated that he heard the airplane impact the ground about 1439.

According to both witnesses, the ground visibility was low due to thick fog at the time of the accident. The airplane came to rest on a 60° slope on the northeast side of South Cinder Peak in the Jefferson Wilderness at a field elevation of about 6,500 ft mean sea level. All four corners of the airplane were accounted for at the accident site. The first point of impact (FPI) was about 500 ft from the top of the peak and was marked by a large ground scar about 6 feet wide. The main wreckage was located down the hill about 20 ft northeast of the FPI and was comprised of both wings, the fuselage and empennage. The engine was collocated with the FPI.

The right and left ailerons were attached to their respective wings, which remained attached at the carry through spar. Both wing leading edge surfaces were crushed chordwise and the leading edge skin forward of the fuel tanks exhibited evidence of hydraulic deformation. The right and left wingtips had separated from their respective wings. The airplane fuselage and cabin were crushed beneath the wings and could not be identified due to their orientation at the accident site. The empennage was inverted, which exposed the anti-servo tab and both stabilators. The vertical stabilizer and rudder assembly were crushed, but remained partially attached to the empennage. Several airframe fragments were distributed along the slope of the peak, below the main wreckage.

The wreckage has been retained for further examination. 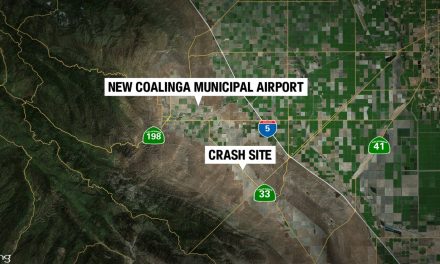