On August 2, 2020, about 1010 central daylight time, a Piper PA-30, N7750Y, was substantially damaged when it was involved in an accident at Shelby County Airport (EET), Alabaster, Alabama. The flight instructor and student pilot were not injured. The airplane was operated as a Title 14 Code of Federal Regulations Part 91 instructional flight.

The flight instructor reported that he was providing instruction to a commercial pilot for a multiengine rating. They briefed the procedures for a simulated short field takeoff. The student taxied onto runway 16, applied brakes, then applied full power. Following an uneventful takeoff roll, the student rotated and raised the landing gear selector. The airplane then yawed to the right toward a line of trees. The instructor took the controls and attempted to correct with left rudder and aileron inputs; however, altitude could not be maintained and the airplane descended to the ground. After touchdown, the landing gear collapsed, and the airplane came to rest against a fence and trees.

An inspector with the Federal Aviation Administration responded to the accident site and examined the wreckage. He reported that there was structural damage to the airplane’s wings, fuselage, and empennage. 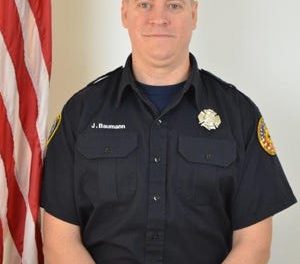