On October 2, 2022, about 1600 mountain daylight time, a Piper PA-46-350P, N987PS, was substantially damaged when it was involved in an accident near Clovis, New Mexico. The pilot and passenger were not injured. The airplane was operated as a Title 14 Code of Federal Regulations Part 91 personal flight.

The pilot reported that a crosswind blew the airplane off course while on a practice Instrument Landing System (ILS) approach to runway 4 at Clovis Regional Airport (CVN). In response, he aborted the approach, applied full engine power, retracted the landing gear and flaps; however, the airplane did not gain the expected altitude or airspeed. The pilot subsequently felt the airplane buffet and lowered the nose. The pilot maneuvered the airplane and initiated a gear up landing to an open field adjacent to runway 4. During the landing sequence, the right horizontal stabilizer impacted an airport sign, and the airplane came to rest upright. A postaccident fire ensued.

Postaccident examination of the airplane revealed that the fuselage undercarriage, right horizontal stabilizer, and the right elevator were substantially damaged. The wreckage was recovered for further examination. 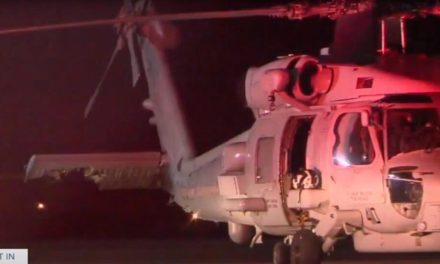