On May 26, 2020, about 1430 eastern daylight time, a Piper PA-24-250, N5948P, was substantially damaged when it was involved in an accident near South Boston, Virginia. The private pilot was not injured. The airplane was operated as a Title 14 Code of Federal Regulations Part 91 personal flight.

The pilot stated that he performed a preflight inspection of the airplane before the intended 20 to 25 minutes flight, which included a check of each wing fuel tank sump drain and also the gascolator with no contaminants found. He also checked the flexible hoses in the engine compartment for condition and security, looked for fuel stains, and checked the P-Leads for condition and security. Prior to departure he performed an engine run-up noting that the magneto decreases were about 25 rpm or less from each magneto. After takeoff he proceeded towards the William M Tuck Airport (W78), South Boston, Virginia, where while on a close-in downwind leg of the airport traffic for runway 19 flying at 1,200 ft mean sea level, the engine experienced a sudden total loss of power. He turned on the auxiliary fuel pump, moved the fuel selector from the left tank where it had been since takeoff to the right tank, and moved the mixture control to full rich, but engine power was not restored. He turned towards the approach end of the runway with the airplane configured with the flaps and landing gear retracted and maintained 80 miles-per-hour (mph). The airplane subsequently impacted an obstruction light, touched down in tall/thick grass on airport property and slid an unknown distance before coming to rest upright.

The pilot added that he did not feel that the loss of engine power was due to carburetor ice because there was no loss of manifold pressure. The airplane was recovered to W78 for examination of the airframe and engine. 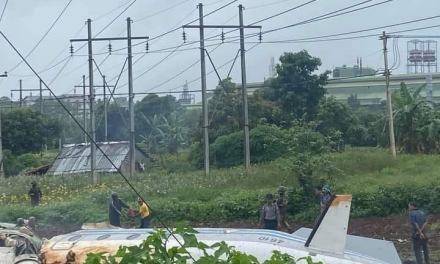