On November 5, 2021, about 1926 eastern daylight time, a Piper PA-30 airplane, N8924Y, was substantially damaged when it was involved in an accident near Rock Hill, South Carolina. The commercial pilot was fatally injured. The airplane was operated as a Title 14 Code of Federal Regulations Part 91 personal flight.

The pilot departed the Rock Hill (York County) Airport-Bryant Field (UZA), Rock Hill, South Carolina, in another airplane with a friend to fly to the Savannah-Hardin County Airport (SNH), Savannah, Tennessee, to pick up the accident airplane, which he had recently purchased. The mechanic who had performed the last annual inspection on the airplane, received a call from the pilot at SNH during which the pilot told him that it was his first flight in a Twin Comanche, and they discussed the fuel tanks. The pilot indicated that he was going to fly to the Hartselle-Morgan County Regional Airport (5M0), Hartselle, Alabama, to pick up the airplane’s logbooks.

The pilot later called the mechanic from 5M0 and stated, “Well, I made my first flight in a Twin Comanche. Everything went great.” He further stated that he had picked up the airplane’s logbooks and that his next stop was the LaGrange-Callaway Airport (LGC), LaGrange, Georgia before returning to UZA. Fuel purchase receipts indicated that 35.78 gallons of 100 LL aviation gasoline were purchased at LGC at 1620.

The pilot subsequently called the mechanic from the airplane at 1838 to report that he was in the vicinity of UZA and the landing gear circuit breaker kept popping. The pilot began to circle south of UZA while the mechanic provided guidance on the manual gear extension process. The calls repeatedly dropped; however, the final call began at 1913 and dropped at 1926 after the pilot stated, “I gotta add some power.”

The airplane impacted a wooded area about 4 nautical miles south of UZA. The airplane came to rest in an upright, nose-down attitude oriented on a true heading of 297°. All major components of the airplane were located at the accident site.

Examination of the wreckage revealed that the airplane’s nose was impact crushed upward and aft and the nose and cockpit area were fragmented. The fuselage was fractured aft of the wing roots and displaced upward. The empennage, with the stabilator and rudder intact, was fractured about 2 ft aft of the baggage door and deformed over the top of the fuselage and was found resting on the right wing.

The right wing was accordion-crushed aft and fractured about 9 ft from its root with the outer wing section laying on top of the inboard section. The right engine compartment and engine were intact; however, the propeller was impact separated from the engine at the crankshaft flange and mostly buried in the soil. Examination of the propeller revealed leading edge damage, twisting and chordwise scratches. The main landing gear remained attached to the wing and was noted in the “down and locked” position.

The left wing leading edge was impact damaged. The engine compartment and engine remained intact with the propeller attached to the crankshaft flange. Examination of the propeller revealed leading edge damage, twisting and chordwise scratches. The left main landing gear was noted in the “down and locked” position with its fractured oleo tube deformed aft at the fractured area. There was odor consistent with aviation fuel at the accident site.

The wreckage was recovered for further examination. Flight control continuity was established from all flight control surfaces to the cockpit area. The stabilator and rudder trims were neutral, and the flaps were in the retracted position. Fuel was found within the gascolator bowls, engine driven fuel pumps, fuel lines, and fuel servos. Recovered fuel tested negative for water contamination.

Both engines were rotated via the crankshaft flange and thumb compressions, valve action, and crankshaft continuity were confirmed. All magnetos were impulse coupled and sparked at all towers. All spark plugs remained installed and displayed normal coloration when compared to the Champion AV-27 chart except for the right engine bottom No.1 spark plug which was impact destroyed. Oil was found in various oil lines throughout the engines and rocker covers.

The oil filters were opened and found to have minor carbon, ferrous, and non-ferrous material. Examination of both engines did not reveal any preimpact anomalies or malfunctions that would have precluded normal operation. A portable GPS, a multi-function display unit, and the green landing light bulb were retained for further examination. 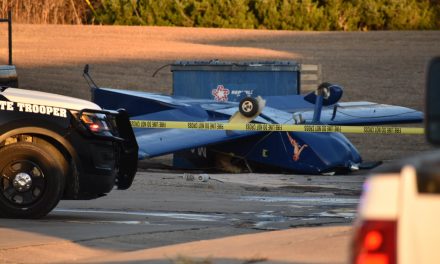 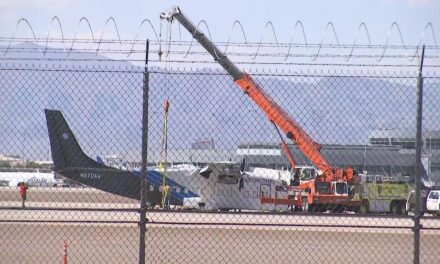