On September 20, 2020, about 1050 central daylight time (CDT), a Piper PA-46-310, N236KM, was substantially damaged when it was involved in an accident near Hilltop Lakes, Texas. The commercial pilot and 3 passengers sustained fatal injuries. The airplane was operated as a Title 14 Code of Federal Regulations (CFR) Part 91 personal flight.

While in cruise flight at 19,000 ft mean sea level (MSL), the pilot declared an emergency to air traffic control (ATC) and stated that the airplane had lost engine power and that he needed to divert. The pilot elected to divert to Hilltop Lakes Airport (0TE4), which was about 5 miles south of his position. Archived FAA automatic dependent surveillance-broadcast (ADS-B) data revealed that when the airplane was about 5 miles west of 0TE4, a descent was initiated from 19,000 ft and the airplane proceeded directly to, and circled around, the airport while descending. ADS-B data was lost about 3 miles northeast of the airport, as the airplane descended below the floor of the ADS-B reception capability.

Commercially available flight track data, which aggregates and georeferences FAA data sources, continued to receive aircraft data as the airplane turned to a final approach segment. The last data point showed the airplane about 1 mile north of the approach end of runway 15 at 0TE4 at an altitude of 1,250 ft, 169 knots ground speed and on a ground track of 145°.
Witnesses located about ¼ mile south of the end of runway 15 reported seeing what they described as the airplane  taking off, before noticing the propeller was not turning. They stated they saw the airplane in a left bank just prior to the nose dropping and the airplane impacting the ground in a near vertical attitude.

The airplane came to rest along a road about 200 ft south of the airport property. The airplane impacted the terrain in a nose low, near vertical attitude and sustained substantial damage to fuselage and both wings.

The airplane was equipped with a Pratt & Whitney PT6A turboprop engine that had been installed in accordance with Supplemental Type Certificate ST00541SE. 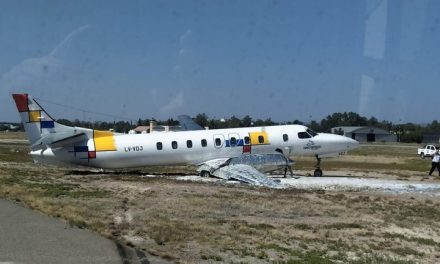